I FEEL PRETTY is Pretty Inoffensive 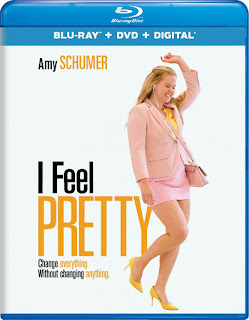 AVAILABLE ON BLU-RAY FROM
UNIVERSAL

Obviously, Amy Schumer's uninhibited brand of comedy isn't for everybody. Like other comedians whose typical routine doesn't come with anything resembling a filter, she's an acquired taste. Comics who get by on sheer audacity, exuberance and a willingness to say or do anything are sometimes the most polarizing.

That being said, I Feel Pretty is sort of Schumer-lite, perhaps because she didn't write this one. Though the basic premise seems tailor-made for her, co-writers/first-time directors Abby Kohn & Marc Silverstein appear to be pulling their punches for a more traditional romantic comedy, with Schumer along for the ride. The result is enjoyable enough, though nothing particularly memorable.

Schumer plays Renee Bennett, an insecure young woman with body-image issues who works for Lily LeClaire, a high-end cosmetics company. She manages the website from a small basement office far away from corporate headquarters - a gleaming glass tower where every employee looks like a supermodel - run by Avery LeClaire (Michelle Williams). Renee spends her time with two equally-timid friends, while aspiring to be like the beautiful women she looks up to.

Following a head injury, Renee wakes up believing she's been miraculously transformed into a stunning beauty, which suddenly gives her the confidence she never had before. She gets promoted to head receptionist at LeClaire, where Avery and company matriarch Lily (Lauren Bacall) are enthusiastic over her suggestions to change the company's elitist image with its latest line of "diffusion line" products. Renee also begins dating Ethan (Rory Scovel), who's as self-conscious as she used to be.

The "joke," of course, is that Renee hasn't physically changed at all, only her perception of herself. This joke isn't always particularly funny, often stopping just short of humiliating its main character during such scenes as a bikini contest or Renee & Ethan's first sexual encounter. One might assume these moments come courtesy of Schumer herself, and perhaps they do, but the film never crosses the line into cheap laughs at Renee's expense. Ultimately, I Feel Pretty has an empowering message about body-positivity and, refreshingly, is not about turning the tables on a batch of elitist snobs. In fact, all the so-called "beautiful people" here are as likable as Renee.

However, the film's consistently positive tone also renders the whole thing pretty predictable. With little in the way of actual conflict, you'll see every revelation and epiphany coming long in advance. Schumer is ironically most effective when she isn't engaging in the brash behavior we typically associate with her.

This will likely disappoint those expecting another film similar to Trainwreck or Schumer's own audacious Comedy Central series. In fact, even though she's decent in the lead role, Renee could have been played by any able actor. I Feel Pretty is watchable - even charming, at times - but never the uproarious romp many are undoubtedly anticipating.