SUPER TROOPERS 2: You Get What You Meow For 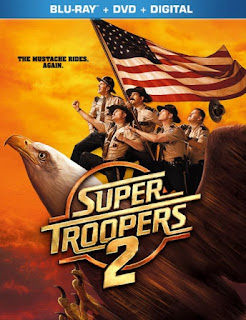 What exactly is so funny about the idea of a couple of highway cops repeatedly working the word meow into their sentences while citing a motorist? On paper, absolutely nothing. It's the kind of gag a seventh grade class clown might do for attention. It's also a typical scene from the original Super Troopers...presented without context and completely unrelated to what could euphemistically called a story.

As much as I hate to admit it, though, I found that scene very funny, among others. So did a lot of people, which is why Super Troopers has such a cult following today.

And it's those people that are almost literally responsible for Super Troopers 2. That this one was partially crowd-funded practically guaranteed the guys in Broken Lizard would give fans exactly what they paid for. Though 17 years have passed, little has changed. These five Vermont State Troopers are still pulling pranks, belittling Farva (Kevin Heffernan), getting wasted and messing with hapless motorists. And of course, it's all as intellectually stimulating as a fidget spinner.

If you look hard, there's an actual plot. It turns out that part of southern Canada is actually United States territory, and the Spurbury police are given a second chance by replacing the Canadian Mounties to patrol this newly-designated region. Of course, neither the Mounties, locals or town mayor (Rob Lowe) are too happy about it. In the midst of an escalating feud with the mounties, they stumble upon a shipments of smuggled drugs, cellphones and assault rifles.

Mostly, though, Super Troopers 2 is about the gags, some funny, some not. I think even many fans would have to agree that its stars ain't exactly thespians, and aside from Farva, none of these characters have distinctive personalities. Like the original, this one plays like a checklist of what Broken Lizard - who write their own screenplays - find personally amusing (with obligatory shout-outs to some of their "classic" gags). If viewers are on-board, great. If not, well, that's okay, too. That laid-back congeniality is part of the film's charm.

Did we really need a Super Troopers 2...almost two decades later? Of course not. Anyone who sat stone-faced through the first one will undoubtedly do the same here (why the hell are you reading this anyway?). Aside from a slightly bigger cast (including many gratuitous cameos), this sequel could almost be considered a remake. Fans whose wallets made it possible probably wouldn't have it any other way.