THE ESSENTIAL JAMES GARNER: A Decent Overview of a Legendary Career 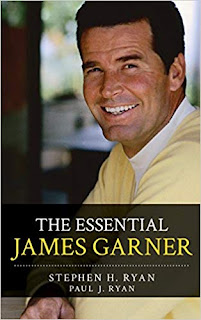 Is there really anyone out there who didn't like James Garner? On screen, the guy may not have had a ton of range, but with rare exception, Garner was always congenial, laid-back and...well, likable. Anyone claiming otherwise probably hates kittens, too.

And in an era when most actors were generally known for movies or television, Garner worked successfully back-and-forth in both...for years. So if nothing else, at least some kind of career analysis is warranted. The Essential James Garner may not necessarily be essential reading, but the book does a decent job highlighting the films, TV movies & series which feature Garner at his Garniest (now officially a word).

The book is divided into three sections. The first and shortest is a relatively concise summary of the man's entire career. Section two - by far, the most interesting - subjectively selects 28 films featuring Garner, from early small parts to starring roles and latter-career supporting performances. Each film is given its own detailed chapter that includes a plot summary, background information, critical & public reception and, finally, critical assessment by the authors. Lastly, section three covers his two career-defining TV shows, Maverick & The Rockford Files, along with Nichols, a failed 1971 series that, quite frankly, I didn't know existed.

Though they demonstrate obvious affection and respect for their subject, authors Stephen & Paul Ryan aren't in love with every movie they choose to discuss. The usual suspects are here (The Great Escape, The Americanization of Emily, etc), along with some of questionable quality, yet were key career moments or good examples of Garner's charm & talent. Conversely, there are some omissions that will inevitably irk a few readers. Garner's entire body of work, however, is included in an appendix.

At 257 pages (including appendices, bibliography and index), The Essential James Garner is by-no-means comprehensive and doesn't make pretenses of being so. Nor is the book remotely biographical, focusing exclusively of the work these authors feel best-encapsulates James Garner's long career. Though fairly subjective, it nevertheless provides the reader with a decent overview, and even longtime fans are apt to read a fact or two they didn't know before.
KITTY CONSENSUS: