INNOCENT BLOOD: What's in a Name? 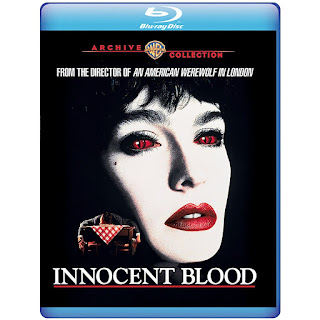 In some parts of the world, this film is known as A French Vampire in America. Considering John Landis' last foray into comedy-horror was An American Werewolf in London, the title makes more sense - and is far more accurate - than Innocent Blood. None of Marie's selected victims are what anyone would mistake for innocent.

Marie (Anne Parillaud) is apparently a vampire with a conscience, preferring to feed on criminals...more specifically, Italian mobsters. Meanwhile, Detective Joseph Gennaro (Anthony LaPaglia) was been working deep undercover, earning the trust of a Pittsburgh mob run by Sal the Shark (Robert Loggia). After one of one of Sal's men is murdered - attacked by Marie, then shot in the head to make it look like a hit - Gennaro's cover is blown and he's taken off the case.

Later, Marie's attack on Sal himself is thwarted by his driver. Since she was unable to completely kill him, Sal becomes a vampire himself, eager to use his newfound power to take control of the city, as well as kill Gennaro for betraying him. Marie and Gennaro end up working (and sleeping) together to try and stop Sal, who's quickly turning his crew into undead soldiers.

Though watchable, Innocent Blood is the work of a once-interesting director at the beginning of a creative downslide (which he's yet to recover from). John Landis had previously displayed a quirky knack for combining comedy and horror in An American Werewolf in London. While that film is now considered a modern classic, the pieces don't fit together nearly as well here. It's a great concept, but clumsily executed. Most attempts at humor fall flat, the sex & nudity are gratuitous and the make-up effects pale in comparison to Rick Baker's groundbreaking work in American Werewolf. Parillaud and LaPagglia may be easy on the eyes, but neither character is particularly interesting and they have zero chemistry together.

The late, great Robert Loggia is easily the best part of the entire film. As Sal, he makes the most of a rare opportunity to engage in some serious scenery-chewing. The movie's a real kick whenever he's onscreen, especially once he becomes a vampire. There's also some fun to be had in spotting the numerous cameos by various horror icons, including Tom Savini, Sam Raimi, Dario Argento & blink-and-you'll-miss-her Linnea Quigley.

Innocent Blood mostly squanders a neat premise, not-to-mention a cast that includes a who's-who of mafia movie tough guys. Still, even though there are better horror comedies from the same era and it pales in comparison to Landis' best work, it remains his last watchable film, which has its share of fans, who'll certainly be happy with this Blu-ray transfer (though there's no bonus material other than a trailer).

NOT BAD...BUT COULD USE AN AMERICAN WEREWOLF OR TWO.
Posted by D.M. Anderson at 5:52 PM