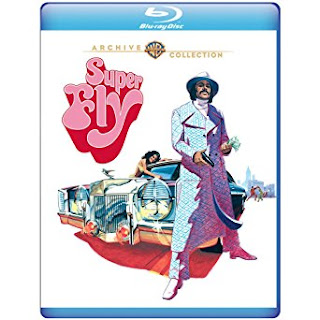 When reviewing discs, I generally watch the film first, then go through whatever supplementary material is included. For some reason, I did the opposite with 1972's Super Fly, which turned out to be a good idea.

Along with Shaft, this film defined 70's "blaxploitation" in the eyes of many, including myself. It's also not a genre I'm particularly familiar with. And because Super Fly is so emblematic of its time, watching the retrospective documentary in advance provides some valuable context that might help the uninitiated appreciate its influence and cultural impact.

Ron O'Neal is Youngblood Priest, a high-rolling cocaine dealer who plans one more big score before getting out of the business for good, which turns out to be easier said than done. The story itself is actually pretty slight, nearly everything related to his line of work regulated to a photo montage and a few corrupt cops on his tail. Super Fly is more about Priest himself. Cool, tough & stylish, he's pretty-much the whole show, whether romping in a bubble bath with his lady, Georgia (Sheila Frazier), turning the tables on his enemies or cruising around New York in his customized Eldorado (which has since-become as iconic as the film itself).

Obviously assembled on a very low budget, Super Fly's writing, direction and cinematography is merely perfunctory. But compensating for its lack of panache are earnest, lively performances and an absolutely killer soundtrack. O'Neal exudes loads of charisma as Priest, and what more can be said about Curtis Mayfield's music score? Not only do they perfectly enhance every scene, the songs have aged a lot better than the film.

Super Fly was somewhat controversial when first released, supposedly for glamorizing drug-dealers and exacerbating a negative image of African-Americans. However, the film does not present the drug business as an appealing career choice. Despite his ride & wardrobe, Priest ain't exactly living like Tony Montana, and none of these characters appear to reap the rewards of their lifestyle. In fact, they've more-or-less been denied opportunities to do anything else. There are numerous moments in the film where Priest is told his dream of finally getting out is hopelessly optimistic.

While Shaft is arguably the most entertaining blaxploitation film of the 70s, Super Fly is just as historically important. Four decades on, it may be a bit too grassroots and - amusingly? - outdated for newcomers. That's why Warner Archive was wise to include a generous amount of bonus material for this release (carried over from the original DVD). Knowing its backstory beforehand makes Super Fly a more rewarding experience for anyone curious about the genre.