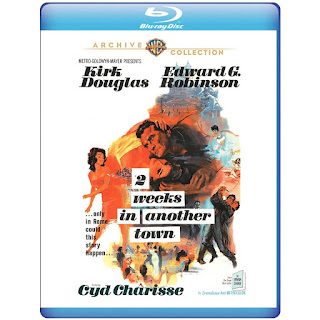 Jack Andrus (Kirk Douglas) is a hot mess. He used to be a big star, making several movies with lecherous director Maurice Kruger (Edward G. Robinson) before having a whopper of a falling-out (Kruger slept with his wife). Now Jack's in a sanitarium, recovering from a nervous breakdown, likely stemming from alcoholism, a bitter divorce and a car crash that nearly killed him.

Then Jack gets a telegram from Kruger, who offers a few weeks' work on a film he's directing in Rome. Though he has reservations, it's an opportunity for a comeback, of sorts. Soon after arriving, however, he learns the production is in trouble and the Italian studio financing the film is breathing down Kruger's neck to complete it on schedule, even if it's terrible. Worse yet, the job Kruger promised is as a dubbing supervisor.

Meanwhile, Jack's wild ex-wife, Carlotta, is also in town with her new wealthy husband, but tries to tempt Jack into being her personal man-toy. The film's male star, Davie Drew (George Hamilton), is hopelessly in love with Veronica (Daliah Lavi) and goes off the deep end when he learns she's been seeing Jack, further hampering production. Kruger's nasty wife continually berates him for his womanizing. After Kruger suffers a heart attack, Jack offers to finish directing the film out of a misplaced sense of loyalty.

If all this sounds like some kind of soap opera, you wouldn't be too far from the truth. Based on one of Irwin Shaw's pulpier novels,Two Weeks in Another Town is textbook Hollywood melodrama: Not much depth, but plenty of big performances, beautiful people and behind-the-scenes bad behavior (at least as it was depicted in the early 60s). Douglas is his usual intense self, while Robinson is wonderfully self-absorbed and conniving. Most of the women are little more than window dressing, but Cyd Charrise looks like she's having fun as Carlotta.

When all is said and done, we don't walk away with much. Two Weeks in Another Town doesn't say anything about the movie business we didn't already suspect. But there's some fun to be had in the film's kitschier moments, and though it's a relatively minor entry on everyone's resume, at least it's seldom boring.