WAIT UNTIL DARK and the Surprising Psychopath 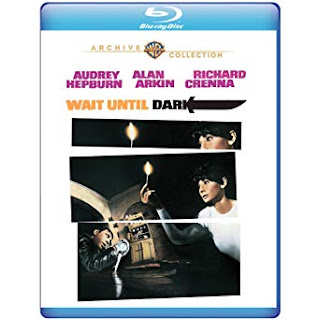 Something occurred to me while recently revisiting Wait Until Dark. Though I would never claim to be the world's foremost film authority, I'm pretty damn knowledgeable, if I do say so myself. I haven't seen everything, of course, and there's even a dwindling list of undisputed classics I loathe to confess I haven't yet seen. So I could be wrong, but this might be the only dramatic film featuring Alan Arkin as a villain.

Not just a villain, but a cold, calculating psychopath...sadistic, apathetic and bereft of anything resembling compassion. It had been years - we're talkin' decades - since I'd seen the film and, quite frankly, completely forgot he was even in it. And having-since associated Arkin primarily with comedies, his performance as drug smuggler Harry Roat was as revelatory as seeing Henry Fonda gunning down a child in Once Upon a Time in the West.

Is it one of his best performances? Of course not, though retroactively watching him playing against type was especially fascinating.

Elsewhere, Wait Until Dark remains one of the greatest single-setting movies of all time, that setting being the small apartment occupied by Suzi Hendrix (Audrey Hepburn) and her husband, Sam. Little do they know that a doll in their possession was used to smuggle drugs into the country. Two low-life crooks (Richard Crenna, Jack Weston) are blackmailed by Harry Roat to get it back. Taking advantage of Suzi's blindness, they set-up an elaborate ruse to gain access to the apartment while she's alone and search for the doll. But Suzi turns out to be smarter and more resourceful than they expected - her disability becoming an asset - particularly during the final act.

For a movie driven almost entirely by characters and dialogue, Wait Until Dark is
a textbook example of suspenseful, efficient storytelling. Tremendous performances help, of course. With all due respect to Breakfast at Tiffany's, Hepburn was never better than she is here. As Suzi, she may be hapless, but not helpless, and at-no-time are we less-than-convinced that her blindness and terror are genuine (her Oscar nomination was well-earned).

Wait Until Dark plays as well today as it did 50 years ago, not-to-mention a pleasant reminder that Alan Arkin could do scary as well as funny. And speaking of funny...dig that crazy mop-top! It's about the only thing that dates this classic cat-&-mouse thriller.

EXTRA KIBBLES
"LOOK IN THE DARK" - In this retrospective featurette, Arkin and producer Mel Ferrer talking about the making of the film.
TRAILERS
KITTY CONSENSUS:

MEE-OW! LIKE TAUNTING A MOUSE TO DEATH
Posted by D.M. Anderson at 11:01 PM