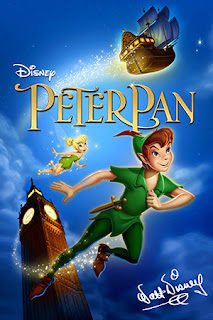 "Now remember, the Indian is cunning, but not intelligent."

Wendy says this to her siblings during their visit to Never Land in Disney's Peter Pan. No, I wasn't offended and won't engage in pretentious retro-condemnation of the film's stereotypical depiction of Native Americans. But wow...it's apparently been a hell of a long time since I've seen this.

Unlike the title of its most endearing song, there are some things in Peter Pan that just don't fly anymore, which actually makes it a more interesting viewing experience than some of Disney's better films from the era. There are other moments - including the decidedly less-endearing song, "What Makes the Red Man Red" - nearly as primeval as the singing crows in Dumbo and the happy slaves in Song of the South. So from a historical context, the film provides a fascinating look at a time when mindsets and values were much different.

The film itself was never one of Disney's best (though Walt himself had been trying to get it made for over a decade). Archaic inclinations notwithstanding, the animation remains impeccable (streaming doesn't do it justice, however). But unlike previous classics with universal appeal, Peter Pan was a pivotal film in Disney's history, arguably being the first one that seemed to be aiming primarily at kids, a direction they'd fully embrace throughout the 60s and 70s with diminishing results.

Blasphemy, you say? Perhaps, but does Peter Pan really equal the timeless artistry of Bambi or Pinocchio, or does it simply evoke fond personal nostalgia? Not that there's anything wrong with that, because who hasn't picked up an old movie out of nostalgia? Hell, that's half of my movie collection. If Peter Pan is a childhood favorite, this "Signature Edition" is loaded with extensive bonus features, most of which were included on the previous "Diamond Edition," as well as older DVDs. Additionally, the two new featurettes will definitely appeal to those who grew up on this film.

EXTRA KIBBLES
We reviewed our digital screener through Amazon Prime, which typically includes all bonus material at the end as part of the feature's running time. Considering the abundant extras, if convenient access is what you're looking for, you are better off with the Blu-Ray or using Movies Anywhere.
NEW: FEATURETTES - "Stories from Walt's Office"; "A Darling Conversation with Wendy & John: Kathryn Beaumont and Paul Collins" (since they were actually involved in the film, this is the best of the new material).
NEW: 2 SING-ALONG VIDEOS - "You Can Fly"; "Never Smile at a Crocodile" (what...no "What Makes a Red Man Red"?)
FEATURETTES - "You Can Fly: The Making of Peter Pan"; "Tinker Bell: A Fairy's Tale"; "The Peter Pan Story"; "Growing Up with Nine Old Men"; "In Walt's Words: Why I Made Peter Pan"; "The Peter Pan That Almost Was"
AUDIO COMMENTARY - by Roy Disney, with other artists & voice actors.
DELETED SCENES
DELETED SONGS
SING-ALONG VERSION OF THE MOVIE
"DISNEY-VIEW" VERSION - Where the sidebars are filled with paintings by artist Cristie Maltese (a Disney Animation background painter).
MUSIC VIDEOS - "Never Land" by Paige O'Hara (you know...Belle); "The Second Star to the Right" by T-Squad.
KITTY CONSENSUS: