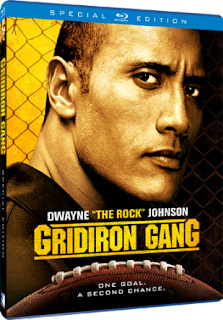 Gridiron Gang has been released on Blu-Ray a few times before, most recently by Mill Creek Entertainment with none of the supplementary material previously available on Sony's initial release. This latest edition - also from Mill Creek - not only restores those bonus features, but includes the original 1993 documentary that inspired the film in the first place.

As for the movie itself, Gridiron Gang is your usual triumph-of-the-underdog sports movie: a gang of misfits brought together by a determined coach who doubles as a father figure. Standing in their way are authoritative naysayers, a community that doesn't believe in them and the players' own personal demons. It all leads up to the climactic game where each selected player has their moment in the sun.

In this case, it's a football team made-up of the gang bangers and delinquents of a juvenile detention facility and their coach is Dwayne Johnson. And, of course, it's based on a true story. Aren't they all? Gridiron Gang follows the formula playbook pretty faithfully, with a lot of the prerequisite soul searching, inspirational speeches and opposing players so viciously hateful that the viewer might wonder how they're even allowed on the field.

As these things go, Gridiron Gang is a decent example of the genre and a rare opportunity at the time for Johnson to demonstrate skills beyond snapping limbs or hoisting his eyebrow. As such, he delivers an earnest, convincing performance, as does his supporting cast of assorted little criminals (especially Jade Yorker as a troubled teen doing time for murder).

This is a difficult genre to screw up, and director Phil Joanou makes certain it doesn't happen on his watch. Gridiron Gang makes no attempt to re-invent the wheel or even give it shiny new hubcaps. Hence, every moment is as predictable as the tide. Then again, this is also a difficult genre not to get swept along by. As such, the film remains an enjoyable example.