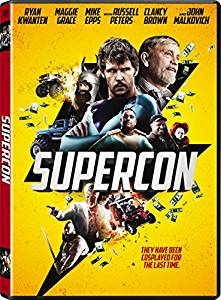 The concept of Supercon is one you'd think would be impossible to screw up. God knows the whole comic-con/cosplaying subculture is ripe for satire and good-naturing ribbing. And with a cast like this, how could it be anything but a goofy good time?

But I laughed exactly once during the entire film, when an autograph-seeking little girl utters a single-word throwaway comment after being dismissed by her celebrity idol. This scene comes at the very end of the movie. The preceding 100 minutes are an interminable parade of obnoxious characters, cheap gags, idiotic slapstick and overall mean-spiritedness.

A shame, really...the plot itself is a great idea: a group of disgruntled, has-been celebrities (the kind who show up to sign photos for extra cash) conspire to rob Supercon, a popular convention from which they were all just fired. But rarely does the story or script take advantage of the humorous opportunities inherent in its setting and the fans who frequent these things.

What we get instead are screaming characters, bathroom humor, racial slurs, sex jokes, gay stereotypes and a running gag in which everyone refers to one of the main characters as "Ball Cancer Boy." Nearly every scene goes on forever without ever being as funny as the writers think they are, and all remaining plausibility flies out the window once the actual heist begins.

None of this is the cast's fault. Overall, the performances are actually really good (Clancy Brown comes off best as an aging, narcissistic TV star), but the self-impressed script completely wastes their talents. And what the hell is John Malkovich doing in this? Did he lose a bet or something?

Supercon might amuse undemanding middle school boys, but anyone looking for wit, clever satire or even well-staged physical gags will likely feel short-changed. Considering the premise, this is a sadly-squandered opportunity.

BLEH. LIKE COUGHING UP A HAIRBALL
Posted by D.M. Anderson at 9:32 PM