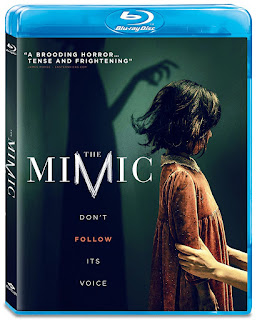 In The Mimic's very first scene, a driver plows into a hapless pooch crossing the road, then tosses the still-whimpering animal into his trunk, where he has also stashed a young girl. This sets the brooding tone for a ghost story that does so many things right, it's a shame when it falls apart in the end.

An estranged couple, still reeling from the disappearance of their son five years earlier, return with their daughter to their home in the country so they can care for the husband's grandmother (who's suffering from some form of dementia). There's weird goings-on in the surrounding woods, including a bricked-up cave that has presumably claimed a lot of lives. One day, a strange little girl turns up. With no parents, the mother, Hee-yeon (Yum Jung-ah), assumes the responsibility of caring for her. But it's soon obvious the girl isn't quite what she seems.

Meanwhile, there are the usual ominous signs that something is reaching out from beyond, which is later explained in-detail by one of the locals. Through flashbacks, we learn the origin of the evil dwelling in the cave: a mythical tiger that lures its victims by mimicking the voice of someone they've loved and lost. It doesn't take a slide-rule for audiences to figure out what happens next.

Up to this point, The Mimic hits all the right notes, establishing an appropriately gloomy tone and creepy atmosphere, with some creatively chilling scenes (mostly involving mirrors, which figure prominently in the narrative). However, the more the exposition the film provides, the less interesting it becomes, a problem exacerbated when the underwhelming - and frankly silly looking - titular villain finally shows up.

Until then, The Mimic is an atmospheric and intriguing piece of K-horror, boosted by good performances all around (especially Jung-ah, who convincingly conveys a grieving mother's desperation). It isn't a particularly "fun" movie, though, since the story also involves the suffering of children (not-to-mention a few dogs).