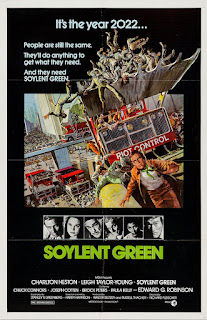 Everybody knows that, just like everybody knows Darth Vader is Luke's old man, Dorothy was only dreaming and Taylor has been on Earth the entire time. So quoting the final line in Soylent Green - memorably moaned by that master of subtlety, Charlton Heston - probably isn't spoiling the party. It isn't like the time I was watching Planet of the Apes on TV when I was 9-years-old and Mom came waltzing into the living room to smugly announce, "You know it's really Earth, right?"

What the fuck, Mom?

I didn't actually say that, of course, because I preferred my ass to be welt-free. The funny thing is, she knew Planet of the Apes' big twist without ever actually seeing the movie herself. That final image of the Statue of Liberty buried in sand became almost instantly iconic (without help from the internet). From that point on, the only people shocked by the film's climax were those fortunate enough to have seen it in 1968...and clueless nine-year-olds catching it for the first time on CBS...hopefully without their spoiler-happy mothers lurking about.

Soylent Green is not as culturally revered as Planet of the Apes, though Charlton Heston was becoming cinema's apocalypse poster boy at the time. The film isn't nearly as much fun, either. In 2022, the world is severely polluted and overpopulated. While the wealthy live in relative comfort in luxurious high-rise apartments (complete with young concubines), most poor bastards dwell in crowded squalor. Suicide, however, is an option. Anyone sick of life can simply show up unannounced at their friendly neighborhood euthanasia clinic and peacefully end it all.

Livestock and crops are nearly non-existent and reserved for those who can afford 150 bucks for a jar of strawberries. Everyone else lives off of government issued crackers, Soylent Red, Soylent Yellow and everyone's new favorite, Soylent Green. In fact, Soylent Green proves to be so popular that people riot when food centers run out.

Frank Thorn (Heston) is a cop investigating the murder of a Soylent Corporation bigwig, who was bludgeoned to death in his swanky apartment. With the help of his researcher & roommate, Sol (Edward G. Robinson, in his final film), the investigation leads him to discover the Soylent Corporation's dark secret: the main ingredient of those delectable crackers isn't soy at all, but people who've been processed through the euthanasia clinics.

Soylent Green ain't exactly a feelgood film. In fact, it's downright depressing at times, such as when Sol finally decides to cash-in at one of those clinics. That scene is even more poignant when you realize Robinson was dying of cancer at the time. He and Heston were friends, so their emotions during his deathbed sequence were genuine. Elsewhere, the film is aesthetically drab & grimy, the tone relentlessly downbeat and pessimistic, its environmental message sobering. We're subjected to so much self-perpetuated human misery that when the big twist is finally revealed, perhaps we really aren't all that shocked.

Still, "Soylent Green is people!" more-or-less immortalized the movie, which has left its indelible mark on popular culture. For over four decades now, it has been referenced, name-dropped and parodied in countless films, TV shows and various other media. There's a metal band that took its name from the title. There are numerous Soylent Green food & cocktail recipes. Yours truly even owns a novelty t-shirt advertising Soylent Green cereal ("Now with more REAL PEOPLE in every bite!"). Neither my wife or daughters have ever sat and watched the movie, but even they know what Soylent Green is made of.

But getting back to the film itself...my pessimistic view of human nature has me wondering if Thorn's discovery would realistically make a difference. The film ends with Heston screeching that immortal, meme-worthy line to the masses, the camera freezing on his bloody, outstretched hand. This raises some troubling questions: What next? Is the Soylent Corporation held accountable for their awful secret? Does a shocked and outraged society rise-up against them? And if all plant and animal life are already on the verge of extinction, what are 40 million people in New York City alone going to eat instead? And if Soylent Green itself is so deliciously addicting, would anyone really care what it's made of?

It's possible people would be initially horrified, but I suspect most would soon bury that knowledge, just like we currently do while enjoying a hot dog. We've all heard horror stories and urban legends about McDonald's ingredients...worm meat, animal brains, etc. But even after Morgan Spurlock exposed the horrors of Value Meals in Super Size Me, McDonald's remained the biggest restaurant chain in the world because Quarter Pounders are still fucking awesome. Since Soylent Green itself looks more like Sun Chips than it does our loved ones, wouldn't most of us do the same, especially if the only other option is starvation?

On a related personal note, yours truly is a coffee junkie. Ever since becoming addicted to it in college, I'm unable to constructively interact with others without starting my day with a cup or six. As an educator in the real world - of middle-schoolers, no less - I'm fairly confident this magic elixir is the only thing that prevents me from becoming a child murderer.

Starbucks, of course, is the evil Galactic Empire of the java-verse. For the longest time, I managed to avoid its insidious allure, dashing clear of the Starbucks in our Safeway parking lot, then juking like Walter Payton to avoid the second Starbucks inside the store. I thumbed my nose at franchise's hipster-baiting trendiness and the idea of shelling-out five bucks for what's essentially a glorified milkshake. I was also convinced most people patronized Starbucks so others could see they patronized Starbucks. After all, coffee is coffee. Anyone who needed whipped cream, sprinkles, syrup and cookie straws weren't hardcore coffee achievers...just candy addicts. To my utter disgust, Starbucks' grande-sized White Chocolate Mocha became my own wife's personal heroin. Worse yet, like the drug-addicted parents we educators are required to report to Child Services, she got our kids hooked on this shit, too.

Between my family, co-workers, acquaintances and friends, I felt like a single ship atop a sea of conformity, feeling superior the mindless sheep willing to wait in a twenty-minute line for something you could get at 7-Eleven for half the price. Whenever I was forced to feed my family's addiction by being the twelfth fucking car at the drive-thru - nearly every weekend - a small part of me wished the neighborhood euthanasia clinics in Soylent Green were real.

Then I received a Starbucks Christmas gift card from one of my students, who apparently assumed teachers must love Starbucks nearly as much as driving Toyota Priuses (you'd be surprised how many of my colleagues own one). I feigned gratitude with a polite smile while making a mental note to drop her grade to a C-. My family was happy, of course. For them, the only thing better than getting Starbucks while holiday shopping was free Starbucks while holiday shopping. So one weekend, card in-hand, we found ourselves in the nearest twenty-minute line at one of our local mall's 17 Starbucks stores. Being that I was exhausted from lugging around Old Navy bags and it didn't cost anything, I caved-in and ordered myself a grande cup of their strongest, darkest roast. "Would you like room for cream?" the bubbly barista asked. Fuck, no.

I took my first sip, and despite scorching my tongue, the heavens suddenly parted and the angels sang. This wasn't just coffee...this was nerve-jolting, eyeball-bursting COFFEE! Sweet ambrosia, where have you been my whole life? Even though I felt like I just joined the world's largest cult, I became an instant Starbucks convert. Sure, I had always managed to brew a decent cup o' joe at home, but it was mere Soylent Yellow compared to this. Today, whenever my wife and I go anywhere, be-it the grocery store or a trip to her mother's, our first stop is always the nearest Starbucks. Someday, I hope to stop at the Starbucks in our Safeway parking lot and pound-back a grande Dark Roast in time to order another one when we get inside the store.

If some nosey cop were to suddenly burst into the store with the ominous announcement that Starbucks' soaked its coffee beans in the blood of children to achieve their delectable distinctiveness, I'm not sure how much I'd really care. Sure, I'd be initially horrified because...you know, the blood of children. But what am I supposed to do...revert back to Folger's?  The prospect of shitting a coconut has more appeal. Besides, it's not like I'd be drinking the blood my children.


Additionally, if I were waiting in one of those twenty-minute lines and the manager came out from behind the counter with a bullhorn to announce, "The supply of Dark Roast has been exhausted," I'd probably incite a riot that would make the one in Soylent Green look like toddlers protesting naptime at a daycare facility.

Am I alone? From my own personal experience, I doubt it. Maybe Soylent Green's concept is actually more timely than we'd like to think. Sure, as 2022 rapidly approaches, it doesn't look like we'll be ready to make Grandpa part of our nutritious breakfast. But we might want to ask ourselves what horrors we'd be currently willing to accept in order to keep consuming the things we love.
Posted by D.M. Anderson at 10:32 PM