Did You Hear the One About the Traveling CHINA SALESMAN? 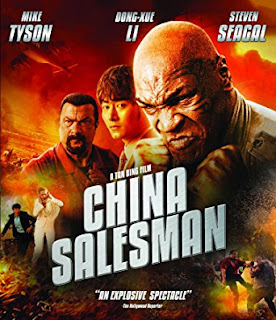 Tyson vs. Seagal? Not quite.

In one of China Salesman's very first scenes, Steven Seagal and Mike Tyson throw-down in a bar. During this lengthy and destructive brawl, Seagal lands a precision strike to the tip of Tyson's ear, which briefly disorients the ex-heavyweight with incessant ringing. Was this a cheeky allusion to Tyson's infamous ear-biting incident? If so, it's as self-aware as this dumpster fire gets. The rest is unintentional comedy gold.

This initial clash of former titans has zero to do with the actual plot, and it's unclear what triggered the fight to begin with. This scene is also the only time they share the screen. Tyson pops up now and then to glare, blow stuff up and deliver every line like he's severely constipated (and it's obvious he looped much of his dialogue during post-production). But give the man some credit...at least he looks like he's trying. Seagal shows-up even less, nearly always seated behind a desk or bar, slurping wine and mumbling so unintelligibly that one wishes his lines came with subtitles.

Speaking of which, the actual star is Dong-Xue Li as Yan Jian, computer whiz and man-of-action (though he spends most of the film getting his ass handed to him). He represents a Chinese company engaged in a bidding war for a contract to run all telecommunications in an unnamed African country. When Yan and his colleagues are speaking their own language, the subtitles flash across the screen so fast that we can't entirely process what they're saying (and this is where most of the exposition is offered). Li also give the film's worst performance, which is really saying something when we remember who else is in the cast.

The plot is so convoluted that we're only vaguely aware of what's going on at any given time. It basically involves a French spy, Michael, who attempts to win the communications contract by triggering a civil war (!). The narrative often jumps from point A to B with little or no transition, and some scenes have no context whatsoever (out-of-the-blue shower scene, anyone?). There's plenty o' gunplay, chases, explosions and mayhem, but it's not always clear who's fighting who or why. Not only that, several characters change sides without warning or logical explanation.

Certainly expensive looking, China Salesman is the obvious result of many investors with deep pockets (check out the sheer number of company logos preceding the opening titles), but I'm not sure where all that money went (explosives, maybe...there's a lot of 'em). The film is so haphazardly assembled, badly acted, poorly executed and atrociously written that its deadly seriousness renders the whole thing hilarious, culminating in an priceless final scene where Tyson is required to emote way, WAY beyond his abilities. If you ain't rolling on the floor by then, check your pulse.