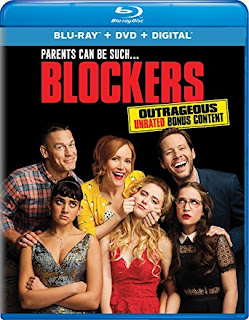 AVAILABLE ON BLU-RAY/DVD FROM
UNIVERSAL

While Blockers is sure to amuse its intended audience, the film doesn't make the most of its premise. The idea of three fiercely overprotective parents going to extremes to stop their daughters from losing their virginity is filled with comedic possibilities. But this is one of those movies where, almost immediately, we can think of how we would have done it differently.

What would have been really funny is if the parents simply mistook their kids' text messages for a sex pact. The extreme measures they take to prevent it could have been a clever and congenial comedy-of-errors just about any parent might relate to. But Julie, Kayla and Sam do indeed plan to lose their virginity on prom night; half of the film consists of the girls partying and puking with their dates. With the exception of Sam, the most insecure member of the gang (and questioning her own sexual identity), none of the teenage characters are particularly interesting. Blockers briefly addresses societal double-standards when it comes to attitudes related to girls' budding sexuality versus boys', but it's late in the film and more of an afterthought.

The parents' adventures range from humorously observational to ridiculously over-the-top, with much greater emphasis on the latter. As Mitchell, Kayla's sports-minded father who refuses to acknowledge she's becoming a woman, John Cena is sometimes quite amusing. Considering Cena's physique and WWE history, it's ironic that he's found his niche in comedy. Ike Barinholtz also has some nice moments as Sam's estranged, no-account father, evolving from a supremely obnoxious loser to the most empathetic character in the entire film. However, Julie's mom, Lisa (Leslie Mann), is the polar opposite. A single parent who fears her daughter will make some of the same mistakes she once did, we initially feel for her. But Lisa grows increasingly shrill and unlikable with every scene.

Despite a few fleeting attempts at poignancy, much of the humor in Blockers aims for the crotch, both literally and figuratively. The story is mostly a clothesline on which to hang a series of episodic, raunchy gags that could have been inserted into countless other explicit sex comedies. Some of this is very funny - Gary Cole and Gina Gershon are a riot as a pair of sexually-adventurous parents - some of it isn't.

I sometimes laughed out-loud, as I imagine a lot of people will. Fans of films such as Neighbors, Girls Trip and Mike and Dave Need Wedding Dates won't have any complaints. As these things go, Blockers isn't bad, but considering the cast and inherent potential of the premise, it could have been so much more.