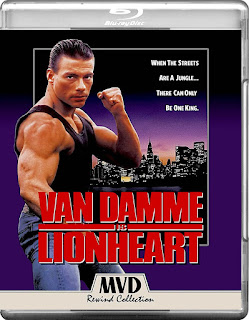 Of all the films Jean-Claude Van Damme appeared in during those early low-budget years, Lionheart is probably his best. Considering the quality of those chopfests (or lack of), "best" might be a relative term. But not-only does it include all the prerequisite pummeling that fight fans expect, this one actually has a fairly interesting story (albeit a familiar one), along with some characters whose personalities extend beyond their fists.

As for the Muscles from Brussels himself...Lionheart is arguably the first film where he's really required to truly act...you know, with emotions 'n stuff. As such, he isn't half bad. Who knows...maybe it was this performance that persuaded studios to take a chance on him in bigger things like Timecop, Universal Soldier and Hard Target.

Van Damme, who apparently came up with the initial story, plays Lyon Gaultier, a French Foreign Legion deserter who comes to the U.S to see his dying brother, who was burned alive during a drug deal gone bad in Los Angeles. Needing quick cash, Lyon ends up participating in underground fights to earn money to get to L.A. He meets Joshua (Harrison Page), who arranges a big money bout run by wealthy and conniving socialite Cynthia (Deborah Rennard).

After arriving in L.A., Lyon is too late to see his brother, but his niece and estranged sister-in-law are in financial dire straights, so he resumes fighting, with Cynthia arranging bigger and more dangerous matches (and has-since dubbed him Lionheart). Meanwhile, a few thugs from the Foreign Legion are looking to bring him back to face the consequenses for deserting. Cynthia convinces them to wait until after one last fight - which she's anticipating he'll lose.

Of course, the numerous fight scenes are Lionheart's strongest asset. They're all well-staged and take place in some interesting locations, such as a mansion swimming pool. Van Damme, of course, engages in plenty of what he does best: punching, kicking, collecting contusions. But unlike, say, Bloodsport, at least the downtime is watchable. Lyon's developing friendship with Joshua even manages to be engaging at times.

One of Van Damme's better early efforts, Lionheart is a good choice for inclusion in the MVD Rewind Collection. And as usual for this series, it's been nicely restored for Blu-ray and includes a lot of bonus material that's as substantial and entertaining as the movie itself.