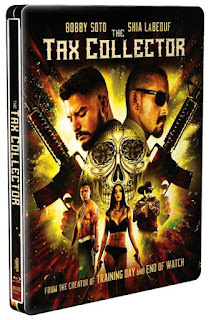 Though I still can’t take Shia LaBeouf very seriously, I gotta admire his fierce dedication to that ‘indie spirit’. And talk about taking method acting to the next level: For his role as a sadistic enforcer simply known as Creeper, he had his entire chest tattooed...for real! Kinda makes DeNiro’s weight gain for The Untouchables seem like small potatoes, doesn’t it?

Still, why would you permanently stencil your body for a gory gangs n’ guns flick like The Tax Collector, especially when you aren't even the star and your character’s gone by the end of the second act?

The real star is Bobby Soto as David Cuevas. With good buddy Creeper tagging along to provide the muscle, he collects regular payments from all the local gangs for LA’s biggest crime lord, The Wizard. In his down time, he’s a loving family man. Then the entire organization is threatened by psychotic rival kingpin Conejo (played by a guy who also goes by ‘Conejo’). When people close to him start dying, David goes on the offensive.

I’ll say this much about LaBeouf...he gives the best performance in the film. I’m still not sure if Creeper is actually supposed to be hispanic or a white guy who’s just infatuated with the culture, but he attacks his one-note role with conviction. Soto tries hard, but fails to give David any real personality. Conversely, Conejo goes completely off-the-rails, glowering and emoting like a Grand Theft Auto villain.

In fact, the entire film plays sort-of like a Grand Theft Auto mission, with all the cartoon thuggery, f-bombs, guns, blood and insensitive stereotypes the comparison suggests. And if that’s your idea of entertainment, The Tax Collector isn’t without its virtues. The plot is predictable, the characters are walking cliches and the dialogue is sometimes laughably pretentious. It also takes way too long to get to the actual plot, but when it finally does, the kinetic action and violence is stylish and fairly enjoyable. Like watching a hardcore gamer lick a GTA mission with ease, there ain’t a lot of suspense, but it’s sort of a fun way to kill time.

Similar to most of writer-director David Ayer’s other films, we walk away without giving the movie another thought. But sometimes we’re in the mood for dumb, gratuitous mayhem, the kind that require no personal engagement beyond keeping track of where the bullets hit. As such, The Tax Collector might hit the spot. But I still can’t help but be dumbfounded by Mr. LaBeouf’s misguided approach to method acting. A chest tattoo? For this movie? Why, Shia, why?