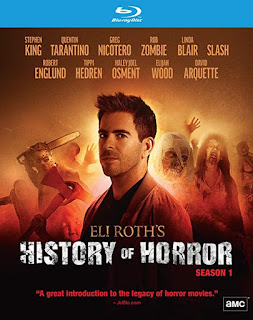 Like James Cameron’s Story of Science-Fiction, which also first-aired on AMC, Eli Roth’s History of Horror isn’t quite as all-encompassing as the title suggests. Though horror has a long, international history in literature, art, comics and television, the focus of this series is mostly on movies. More specifically, American movies, especially those of the past 60 years.

Which, to a certain extent, is to be expected. Most of us associate horror with movies and even Stephen King - featured extensively throughout this series - seldom discusses the genre outside of that context. Additionally, it’s been during the last half-century that horror has thrived and a majority of the iconic films from those decades have come from America.

Given those parameters, the show is a pretty extensive summary of horror cinema and its various subgenres. The seven episodes comprising Season 1 are “Zombies,” “Ghost Stories,” “The Demon Inside,” “Vampires,” “Killer Creatures” and “Slashers” (which apparently warrants two episodes, though I do not agree that Silence of the Lambs is a slasher movie). Each one features dozens of film clips, with extended segments focusing on those which were the most influential or had substantial cultural impact. As for executive producer & host Eli Roth...his own films might polarize the horror community, but he really does know his shit.

Numerous directors, writers, historians and actors - many interviewed by Roth himself - discuss the cultural and/or societal significance of films and genres in the context of when they were made, as well as how they were impacted personally or professionally. Their insights are often interesting, sometimes a bit pretentious and occasionally academic. While the overall sincerity of everyone involved - especially Roth - is inarguable, the series isn’t particularly informative. There’s a good chance the intended audience won’t actually learn much they didn’t already know.

Still, it’s an entertaining tour, featuring of slew of famous and not-so-famous faces, some whose careers have been defined by horror, others who simply have a huge appreciation of it (like Rob Zombie, who round-tables with Roth and Greg Nicotero and appears content to let them do all the talking). Hard core horror fans will probably cry foul at the near-total exclusion of Europe and Japan’s considerable contributions to the genre (Season 2, perhaps?), but it’s hard to argue with what’s here.

EXTENDED INTERVIEWS - The best of the bonus features, these are lengthy interviews with various directors and writers, who talk with Eli roth about a variety of horror-related subjects.

FEATURETTES - “How Abbott & Costello Meet Frankenstein Influenced Tarantino”; “How Video Games Resurrected Zombie Movies”; “Is Horror Sexist or Feminist?”; “Making a Monster”; “Scarred for Life” (most of these featurettes are culled from topics discussed in episodes or interviews).
KITTY CONSENSUS: