Good Things from a BAD EDUCATION 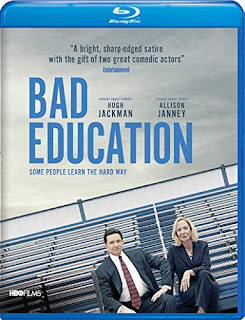 Perhaps Hugh Jackman is trying to forge himself a new identity as the go-to Scandal Guy. Bad Education marks his second film in as many years where he plays a powerful authority figure whose fall from grace is his own doing. In addition to singing, dancing and slicing-&-dicing in the name of justice, it turns out Jackman’s equally adept at playing sharply-dressed scumbags.

Like The Front Runner, this one is based on a true story. Jackman plays Frank Tassone, the highly-respected superintendent of New York’s Roslyn School District who was caught embezzling millions. At first, though, he’s largely credited with making the local high school one of the most prestigious in the nation, to the joy of the community and school board members, whose property values have skyrocketed.

So when it’s discovered that assistant superintendent Pam Gluckin (Allison Janney) is using school funds for personal gain, Tassone urges the school board - led by “Big” Bob Spicer (Ray Romano) - to keep it under-wraps, since an ensuing scandal would ruin the district’s national reputation. However, while doing research on the budget for a proposed skywalk for the high school, ambitious teen reporter Rachel Bhargava (Geraldine Viswanathan) discovers a massive amount of questionable transactions in the invoices, a paper trail that ultimately leads to Tassone.

Meanwhile, Tassone struggles to maintain his facade, as well as his obsession with his health and  youthful appearance (including cosmetic surgeries at the district’s expense). He’s also leading a double life, living in a penthouse apartment with his domestic partner while setting-up-house with dancer-and-former-student Kyle (Rahael Casai), who he met while at a conference in Vegas.

Slightly satiric in tone, Bad Education methodically details how the scandal is exposed, little by little, while Tossone seems to be in denial that he’s actually done anything wrong. But it’s the performances that really keep the film compelling. Jackman does a masterful job depicting Tassone’s descent from empathetic educational superhero to self-absorbed sociopath. Even the viewer is initially blinded by his humility and charm. And currently, no one portrays a cast-iron bitch as effortlessly as Janney. While her role ain’t exactly a stretch, she provides the appropriate amount of vindictive nastiness her character requires.

A fascinating scandal that’s certainly movie-worthy, Bad Education approaches the material with the right balance of humor, characterization, dramatic license and historical accuracy. It’s all wrapped up in a fast-paced narrative and punctuated by a great performance by Jackman as yet-another white-collar crook.

3 PROMOTIONAL FEATURETTES - “Based on a True Story”; “The Perception of Perfection”; “Hugh Jackman & Allison Janney Virtual Conversation” (Each runs about 3-5 minutes)