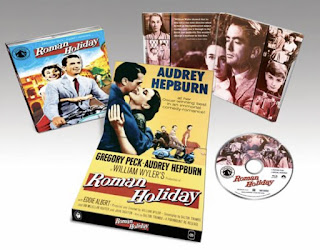 Revisiting Roman Holiday (#9 in the Paramount Presents series), the film revealed a side of Audrey Hepburn I never noticed before.

It was in the first scene, where Princess Ann (Hepburn) is receiving a long line of foreign dignitaries. As she’s greeting guest after guest, her shoes grow uncomfortable. Since her legs are concealed by a long gown, the camera peeks underneath to show her kicking off one of the shoes. That’s when I noticed Audrey had one hairy-ass set o’ gams!

Not that it renders the lovely Ms. Hepburn any less enchanting, nor do I begrudge her personal grooming choices. I’m just surprised because Roman Holiday was made in a day-and-age when Hollywood built starlets to be perfectly shaped and styled, their skin completely free of the unsightly blemishes that mark the rest of us mere mortals.

Perhaps the outstanding Blu-ray transfer made it more noticeable. Long overdue, it not only enhances Hepburn’s hairier side, it makes Roman Holiday look like it could’ve been released yesterday. The film itself remains as charming, funny and engaging as it was 68 years ago, with a star-making performance by Hepburn as a beleaguered princess who escapes constant public scrutiny by sneaking away to experience Rome on her own. Through amusing circumstances, Ann meets opportunistic American reporter Joe Bradley (Gregory Peck).

Ann keeps her identity a secret, while Joe doesn’t reveal his profession and already knows who she really is. Since her absence has caused a press conference to be cancelled - with a cover story that she’s ill - Joe initially sees this as a chance to get an exclusive story, with photographer pal Irving (Eddie Albert) documenting their amusing exploits as Joe shows her around Rome. Of course, anyone who’s even seen one romantic comedy can figure out what happens next.

Watching the movie again for the first time in...well, forever, I was also reminded that Gregory Peck was a decent comic actor. Most of his iconic roles have been in dead-serious films, but Roman Holiday was one of the few where he got to show his lighter side. He makes the most of the opportunity with a wonderfully laid-back, congenial performance.

It goes without saying that  Roman Holiday is a must-own for classic movie lovers and Paramount does right by the film with this Blu-ray. In addition to the great transfer, there’s also a bigger batch of bonus features than any previous Paramount Presents release.  Most are fairly short and not all of them are directly related to the film, but they’re enjoyable, especially the feature about screenwriter Dalton Trumbo, which succinctly summarizes what McCarthyism did to so many careers.

But for me, the niftiest aspect of Paramount Presents remains the packaging, which folds-open to reveal the film’s original poster art. The series is obviously intended for those of us who still take pride in displaying how we've blown our discretionary income and Roman Holiday is a great addition to that collection, hairy legs and all.

MEE-OW! LIKE BEING TURNED LOOSE IN A BIRD SANCTUARY.
Posted by D.M. Anderson at 8:08 PM