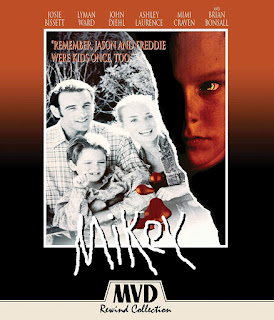 Some of you might remember Brian Bonsall, whose greatest claim to fame was playing the Keaton family’s "cute" new addition to boost ratings during the last few seasons of Family Ties. Then there’s Ashley Laurence, who earned her Scream Queen cred in a couple o’ Hellraiser movies but did little else anyone ever saw. Finally, we have Mark Venturi, who was gone too soon but previously achieved some cult immortality in Return of the Living Dead as perpetually-angry punk Suicide (“Nobody understands me!”).

If you’ve ever wondered whatever happened with these three after the roles that made them famous - however briefly - then Mikey is the movie for you. Unfortunately, the curiosity factor is just about all it has to offer. Desperate to be The Bad Seed for a new generation, Mikey is undone by unimaginative direction, stupid characters and a story that ain't remotely plausible.

Right from the get-go, the nine-year-old titular character (Bonsall) is established as a psychopath, murdering his entire adoptive family. He’s later placed with the Trentons, another young couple who remain blissfully ignorant of Mikey’s antisocial tendencies until it’s way too late. Only his teacher, Shawn Gilder (Laurence), and Detective Reynolds (Venturi) suspect the kid might be wired funny. In the meantime, Mikey becomes twitterpated by his teenage neighbor and starts killing again, displaying more intuition, agility and strength than any adolescent in recorded history. Or maybe he just has the good fortune to surround himself with adults who are more helpless and dumb than snared tuna.

Which might be fine if Mikey was a scary character...or even a little intimidating. But unlike Rhoda Penmark in The Bad Seed, Mikey mostly comes across as a snotty little brat, only instead of throwing a tantrum, he snaps your cat’s neck. There’s no tension, nor any effort to provide context for his personality or behavior. The entire film coasts on the conceit that simply showing a marginally-talented child actor doing the killing is inherently terrifying.

Oh, I almost forgot one other point of interest...you know that obnoxious pudgy kid at the beginning of Jurassic Park who insults Dr. Grant by comparing velociraptors to turkeys? That kid (Whit Hertford) shows up here, too, playing Mikey’s only friend. Though he might have deserved a dino-disemboweling in JP, I won’t reveal whether he lives or dies in this one. There...I’ve just created more suspense than anything you’ll find in the movie itself, which culminates in a ridiculous final act that practically dares viewers to suspend their disbelief.

But while Mikey is dumb enough to make Sleepaway Camp look like Rosemary’s Baby, the bonus features that come with it are top-notch. There ain’t a lot of ‘em, but the new feature-length documentary is more entertaining than the movie, and quite revealing, too. It turns out director Dennis Dimster was a child actor himself before jumping behind the camera. In addition to his insights on the film, he provides a lot of great stories of his own acting career (including scenes from guest appearances in such shows as Charlie’s Angels). Bonsall (all grown up, of course), producer Natan Zahavi & DP Tom Jewett are also on-hand with anecdotes of their own.

“THE MAKING OF MIKEY” - An outstanding feature-length documentary.

“MIKEY: ANATOMY OF A SCENE” - Director Dennis Dimster-Denk provides in-picture commentary of the idiotic climax (but he remains infatuated with).

BLEH! LIKE COUGHING UP A HAIRBALL.
Posted by D.M. Anderson at 3:23 PM