THE LEGEND OF TOMIRIS: History Schmistory 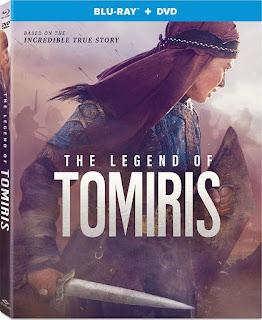 When writing reviews, I usually pull up iMDB or Wikipedia pages for cast, crew and release information (and in the case of this Kazakhstani film, help with spelling). Delving into the background of The Legend of Tomiris, I couldn’t help but notice that a good deal of criticism has been leveled at its historical accuracy.

Frankly, I’ve never understood why that matters. Movies ‘based on a true story’ have almost always played fast & loose with actual facts because...they’re movies. Sure, some abuse the truth less than others, but it doesn’t change the fact they’re meant to be entertainment, not education.

While watching The Legend of Tomiris, I didn’t give two shits if 'the incredible true story’ of its titular character was accurate. She could’ve been presented as one of the original X-Men and I wouldn’t have cared. Since it’s not ‘based on the incredible textbook,’ I enjoyed the film for what it was...an epic tale of a woman warrior who becomes a powerful Massagetae queen, administering violent retribution on those who’ve wrong her (i.e. killed her family) or threaten her reign (those nasty Persians).

The film originally ran over three hours, but has been trimmed to a comparatively-brief 155 minutes for this release. I think it’s safe to assume most of the cuts were related to character development, since Tomiris (Almira Tursyn) comes across as more of a symbol of justice than anyone we get to know in substantial detail. The same can be said for hunky husband-king Argun (Adil Akhmetov) and those who fight alongside them.

We also develop an interesting takeaway as the story unfolds. Though we root for them when they're threatened with invasion by Persia’s ruthless king, Cyrus (Ghassan Massoud), the Massagetae themselves also thrive by raiding and pillaging nearby tribes. Living and dying by the sword, they’re kinda like Klingons with horses. The only real difference between the two is that Cyrus is crafty and dishonest, while Tomiris is deified as a noble savage...a female William Wallace, if you will.

Speaking of which, the film bears other similarities to Braveheart (besides fudging some historical details). In addition to giving us a main character who’s initially motivated by revenge, The Legend of Tomiris is highlighted by massive, lengthy battle sequences. Though not quite as visceral as those in Braveheart, they are big, brutal and bloody. I really like how these scenes show Tomiriis’ strategies unfolding just as she planned them.

The film concludes with the narrator extholing Tomiris’ place in Iranian history. Maybe he’s bullshitting, maybe not. I didn’t care either way. Though it lacks dynamic characters and features protagonists just as invasive as the antagonists, The Legend of Tomiris is an entertaining enough action epic to justify its lengthy running time. It may not be an effective history lesson, but works just fine as a movie.
KITTY CONSENSUS: