THE PALE DOOR Has a Hitch in the Gitalong 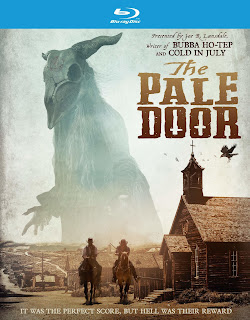 When done right, genre mash-up movies can be a lot of fun. Cult classics like Near Dark and From Dusk ‘till Dawn immediately come-to-mind. But too often, filmmakers are under the false assumption that the concept alone is all you need.

For example, The Pale Door has an irresistible premise. The Dalton Gang is an eclectic batch of outlaws who rob a train, killing all the pinkerton guards and making-off with the giant cashbox. But not only does gang leader Duncan (Zachary Knighton) get shot during the robbery, all that’s inside the trunk is a young woman, Pearl (Natasha Bassett), who offers a reward and medical help for Duncan if they take her back to her hometown of Potemkin.

However, Potemkin is mostly deserted, save for the local brothel run by Maria (Melora Walters), who’s actually a witch who was once burned at the stake 200 years earlier. The prostitutes are witches, too, and eventually reveal themselves as hideous, slimy, hook-nosed monsters bent on killing the entire gang. However, the guy they really want is Duncan’s little brother, Jake (Devin Druid), because as a virgin who’s never taken a life, his blood is pure.

It sounds great on paper. However, The Pale Door ultimately fails as both a horror film and a western. First off, the story takes forever to get going, during which time we’re introduced to an assortment of dull cowboy stereotypes, the only interesting one being Bill Sage as hardass henchman Dodd. The relationship between the two brothers is perfunctory, including a needless prologue depicting a childhood tragedy. And despite all the horses, six-shooters and ten-gallon hats, the film never really feels like a western...just a bunch of actors on sets that look too artificial to be convincing. That could be due to a tight budget, so we won’t hold that against it.

But even with limited resources, there’s the opportunity to introduce some intriguing gothic horror to the narrative, perhaps with the Daltons gradually falling prey to seductive witchery or something. Instead, special effects take over. With a second half ripped right out of the Robert Rodriguez playbook, these witches suddenly attack and kill with the ferocity of Evil Dead demons. The practical gore effects are okay, but we’ve seen it all before and there isn’t any real suspense, not even when the last few survivors are trapped inside a church, which the witches can’t enter, of course (prompting us to question why they’d leave it standing in the first place, but never mind).

The film is competently made, with (mostly) adequate performances and workmanlike direction. But the pacing is erratic and despite an intriguing conceptual mash-up, the story is pretty derivative. Lacking the tone and atmosphere of either genre it attempts to emulate, The Pale Door squanders a great opportunity. It might be watchable, but it’s never very engaging.