GAME OF DEATH, Party of Douchebags 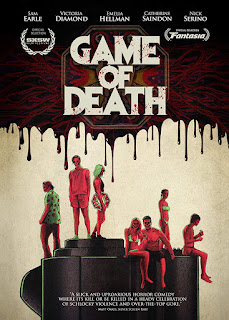 Sort of an unholy cross between Jumanji and The Ring, Game of Death is a low budget horror film about a gaggle of obnoxious teens who stumble across the titular board game. After being duped into giving it samples of their blood, they learn the horrifying rules: During the course of the game, they must kill 24 people. If too much time elapses between killings, one of them will die.

If you can slog through the first ten godawful minutes - featuring these kids drinking, smoking, dropping acid and bumping uglies - Game of Death offers some sick thrills. Gleefully gory and occasionally funny, the film revels in exploding heads, vehicular homicide and shooting sprees, all depicted in vivid detail. Subtle, it ain’t, nor are some of the stylistic flourishes from directors Sebastian Landry & Laurence Baz Morais.

However, the dialogue is awful and none of these characters are remotely interesting or likable. The body count is high and, considering the budget, the special effects are pretty impressive. But since we don’t really care who lives or dies, it’s kind of like watching someone else playing a violent video game.

Still, if mayhem is your thing, Game of Death more-or-less delivers. Running a scant 83 minutes, the basic concept and death scenes may be enough to keep the film from wearing out its welcome. Just don’t expect much beyond visceral shits-&-giggles.