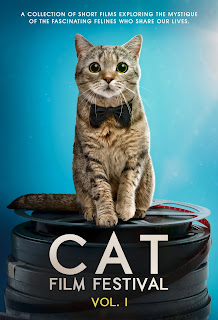 The Cat Film Festival is an annual New York event founded by animal advocate Tracie Hotchner. She also oversees a dog film festival, but since our staff only enjoys canine cinema when the dog dies at the end, we’ve decided to narrow our focus.

The title is just a tad misleading, since Cat Film Festival Vol 1 is not quite the ‘collection’ I expected. It consists of only five films, two of which make up an hour of the scant running time. The other three mostly serve as bookends.

It starts off great, with a faux commercial that parodies prescription ads, touting the physical and mental health benefits of cats and a hilarious list of potential side-effects from keeping one as a pet. Next is a short documentary about a man who specializes in grooming uncooperative cats. The guy gears up like going to war and watching him in action is pretty amusing.

The first lengthy piece, “Jetty Cats,”  features a Southern California wharf that’s been home to abandoned & feral cats for decades. A local animal rights group feeds, protects and neuters them while respecting their independence (the “trap-neuter-release” program is apparently catching on in various regions where stray cats congregate). The film also provides a narrative history of how cats have been domesticated - and sometimes vilified - over the centuries. The other longer piece features an Arizona shelter that started a program where kittens are raised and socialized at various Alzheimer’s care facilities before being placed for adoption (benefitting the cats while providing a form of therapy for the patients).

Capping things off is humorous a public service video which has a man trying to take the place of a young lady’s cat by behaving like one. And of course, he’s not quite as endearing.

From an entertainment standpoint, the three short films are highly amusing and the fact that the program starts-off with two of them has the viewer anticipating a variety of funny stories & sketches featuring cats and their owners. Not to take away from the longer features - the first is quite interesting; the second is filled with touching moments - but they sharply contrast the lighter tone established by the shorts. Both are good films, but to be truly honest, they aren’t as fun and probably should’ve been part of a different program.

But that’s just me. Maybe the main purpose of Cat Film Festival is to create awareness and advocacy rather than pure entertainment. If so, I suppose Vol 1 - with more volumes coming to Amazon & Tubi in upcoming weeks - accomplishes its goals. There are felines o’ plenty, but cat lovers purely looking for feline fun should probably stick to YouTube.