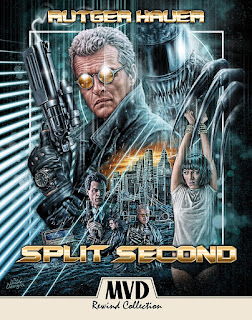 If some company ever has the gumption to put together a retrospective “Rutger Hauer Collection,” they’d obviously need to include Blade Runner, The Hitcher and one of the early Paul Verhoeven films that jump-started his career. Since Hauer also had a knack for being equally at-home in trashy B-flicks, you gotta throw-in one of those...and you’d have a lot to pick from.

WhIle a strong case could be made for Blind Fury, I’d personally throw my hat in the ring for Split Second. Though it has a sizable cult following, no one would seriously mistake it for a great film. But Hauer’s gnashing, slightly self-aware performance lifts it above the plethora of other budget-conscious sci-fi action titles that once fought for space on Blockbuster shelves.

The film takes place in 2008 dystopian London, which is mostly flooded due to global warming. Hauer chews the scenery with abandon as Harley Stone, a crazed cop fueled by coffee and chocolate who’s never gotten over the death of his partner at the hands of an alleged serial killer. Three years later, the killer has returned, brutally murdering several people by ripping out their hearts. Reluctantly dragging along nebbish new partner Dick Durkin (Alastair Duncan), Stone becomes dangerously obsessed with avenging his partner’s death. However, it turns out the killer isn’t actually human, but a slimy, sewer-dwelling monster that absorbs the DNA of its victims.

That’s the long & short of the story, with Stone’s partner’s widowed wife, Michelle (Kim Cattrall), thrown in as a love interest (though she mostly exists to take showers and be placed in peril). Elsewhere, the film is highly derivative of Alien, right down to the creature’s appearance. However, Split Second injects a healthy sense of humor into the mayhem, especially during Stone’s frequent clashes with Durkin. Duncan’s stoicism amusingly contrasts Hauer’s Roy-Batty-on-meth approach, so despite the bleak, grimy setting and copious violence, the overall tone of the film is actually pretty light.

The result is a lot of trashy fun, immeasurably elevated by Hauer, creating a more entertaining main character than movies like this usually have...or deserve. Because of this, Split Second has-since become a minor cult classic, making it a perfect addition to the MVD Rewind Collection. As usual for the series, the disc is loaded with a ton of supplementary material - much of it brand new - that fans will certainly appreciate. And since we probably won’t ever see that retrospective movie collection Rutger Hauer certainly deserves, releases like this will do nicely.

7 PROMOTIONAL TV CLIPS - Not TV spots. These are promotional clips of various scenes from the film.

REVERSIBLE COVER - Both new and the original artwork (we kind-of like the new stuff).