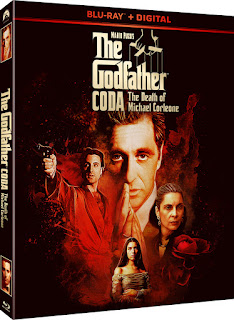 THE GODFATHER, CODA: THE DEATH OF MICHAEL CORLEONE on Blu-ray 12/8
"'Mario Puzo's THE GODFATHER, Coda: The Death of Michael Corleone' is an acknowledgement of Mario's and my preferred title and our original intentions for what became 'The Godfather: Part III,'" said Coppola. "For this version of the finale, I created a new beginning and ending, and rearranged some scenes, shots, and music cues. With these changes and the restored footage and sound, to me, it is a more appropriate conclusion to 'The Godfather' and 'The Godfather: Part II' and I'm thankful to Jim Gianopulos and Paramount for allowing me to revisit it." Coppola and his production company American Zoetrope worked from a 4K scan of the original negative to undertake a painstaking, frame-by-frame restoration of both the new Mario Puzo's THE GODFATHER, Coda: The Death of Michael Corleone and the original The Godfather: Part III. In order to create the best presentation possible, Zoetrope and Paramount's restoration team began by searching for over 50 original takes to replace lower resolution opticals in the original negative. This process took more than six months and involved sifting through 300 cartons of negative. American Zoetrope worked diligently to repair scratches, stains, and other anomalies that could not be addressed previously due to technology constraints, while enhancements were made to the original 5.1 audio mix. 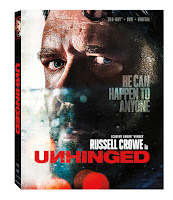 UNHINGED on DVD and Blu-ray 11/7
Academy Award® winner Russell Crowe stars in Unhinged, a psychological thriller that explores something we've all experienced — road rage — to an unpredictable and terrifying conclusion. Rachel (Caren Pistorius) is running late to work when she has an altercation at a traffic light with a stranger (Crowe) whose life has left him feeling powerless and invisible. Soon, Rachel finds herself, and everyone she loves, the target of a man who decides to make one last mark upon the world by teaching her a series of deadly lessons. What follows is a dangerous game of cat and mouse that proves you never know just how close you are to someone who is about to become unhinged. 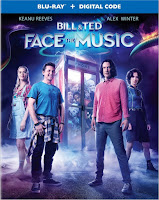 BILL & TED FACE THE MUSIC on Blu-ray and DVD 11/10
From Metro Goldwyn Mayer's Orion Pictures and Warner Bros. Home Entertainment have officially announced that they will release on Blu-ray Dean Parisot's Bill & Ted Face the Music (2020), starring Keanu Reeves, Alex Winter, Samara Weaving, Jayma Mays, and Anthony Carrigan. The release will be available for purchase on November 10. Synopsis: The stakes are higher than ever for the time-traveling exploits of William 'Bill' S. Preston Esq. (Alex Winter) and Theodore 'Ted' Logan (Keanu Reeves). Yet to fulfill their rock and roll destiny, the now middle-aged best friends set out on a new adventure when a visitor from the future warns them that only their song can save life as we know it. Along the way, they will be helped by their daughters, a new batch of historical figures, and a few music legends — to seek the song that will set their world right and bring harmony in the universe. 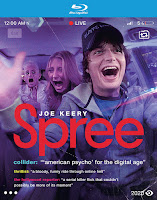 SPREE on DVD and Blu-ray 10/20
SPREE is directed by Eugene Kotlyarenko from a script co-written by Kotlyarenko and Gene McHugh.  The film features an all-star cast led by Joe Keery, Sasheer Zamata, David Arquette, Kyle Mooney, Mischa Barton, Frankie Grande and John DeLuca. RLJE In SPREE, Kurt (Joe Keery) is a 23-year-old rideshare driver for Spree, who is so desperate for social media attention that he'll stop at nothing to go viral. He comes up with a plan to livestream a rampage as a shortcut to infamy - coining his evil scheme "#thelesson", he installs a set of cameras in his car and begins streaming his rides. Wildly miscalculating the popularity that would come from his lethal scheme, Kurt’s desperation grows as he tries to find a way to overcome the plan's flaws. In the middle of all this madness, a stand-up comedian (Sasheer Zamata) with her own viral agenda crosses Kurt's path and becomes the only hope to put a stop to his misguided carnage.
Posted by D.M. Anderson at 2:20 PM