GENESIS II and PLANET EARTH: Looking Back at the Future 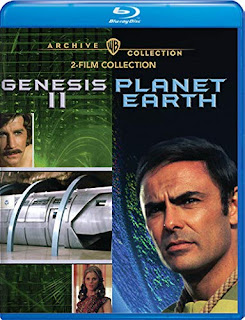 Man, talk about your blasts from the past…

I remember watching Genesis II when it premiered on CBS when I was a wee one. Star Trek reruns notwithstanding, science-fiction television was pretty rare, so its futuristic look and concept was something of a novelty. This was also the first sci-fi movie I ever saw that mentioned the year it took place: 2133.

2133! That’s waaay in the future! And look at that 600 mph underground train (aka, subshuttle)! And that technologically-advanced city! Things don’t get much more sci-fi than this!

The subshuttle itself never actually moved more than a few feet and the exotic city of Tyrania was just the University of California campus. But to a nine-year-old in the early ‘70s, it was all convincing enough.

What I didn’t know at the time: Genesis II was Gene Roddenberry’s attempt at another weekly sci-fi show (though more Earth-bound than Star Trek). He tried like hell, too, because he repurposed the concept - and some of the same special effects - as Planet Earth, which aired on ABC a year later. Alas, neither became a series, and after yet-another reworked pilot (Strange New World), Roddenberry’s apocalyptic vision of the future became a thing of the past.

Genesis II and Planet Earth might be all-but-forgotten by most, but for those of us who remember life before Star Wars, this 2-film Blu-ray is one mother of a nostalgia trip.

In Genesis II, Alex Cord and his mustache play Dylan Hunt, a scientist who volunteers to be the guinea pig in his own suspended animation experiment. After an earthquake buries his lab, Dylan is discovered and revived 154 years later by the PAX, a peace-loving society that has lived underground since a global war destroyed most of civilization. Their chief rivals are Tyranians, a totalitarian race of mutants who live in a nearby city and enslave those they capture. Since both have been relying on technology created before either existed, Hunt’s know-how is suddenly very valuable.

The late, great John Saxon takes over the lead role in Planet Earth. He may not have Cord’s swingin’ ‘70s swagger, but he’s a better actor and more personable. Though the subshuttle remains a vital part of the story (probably because it was expensive), this one has the PAX living above-ground...on campus, so to speak. Hunt leads his team in search of a missing surgeon - the only man able to save the life of a PAX leader - who’s been captured by Amazons, a society where women rule and men are slaves. Meanwhile, a violent band of mutant road warriors (yes, I meant to say that) are preparing to attack the Amazons.

Of the two, Genesis II looks and feels more like sci-fi as purveyed in the early ‘70s...lots of silly costumes, matte paintings and creative use of modern architecture to depict the future. The concept and story also reflect some of the high-mindedness Roddenberry provided in Star Trek. Planet Earth is more action oriented, even briefly achieving an apocalyptic grittiness that pre-dates The Road Warrior (the aforementioned mutants and their battered vehicles). Still, both films are definitely products of their time, with a lot of former Star Trek guest stars popping up here and there. Depending on your age, this double feature is either hilariously archaic or a warm, wonderful trip down memory lane.I count myself among the latter. Yeah, the films look and feel quaint today, but they also evoke fond memories of sitting on the living room floor in front of our console for the latest made-for-TV “Movie of the Week.” So it goes without saying that this collection is highly recommended for those with similar childhoods. The only drawback is the lack of bonus features, since the story behind Roddenberry's quest to repeat his Trek success is a story unto itself.
KITTY CONSENSUS:

I used to watch GENESIS II whenever it was shown on TV - loved the concept, but I guess I didn't "get it" that the guy from the past just nuked a whole city - guilt and innocent. ...but, the navels!

As for EARTH II...ugh. But I always liked John Saxon wherever he showed up. He always played a thinking man just one scratch away from being a brute.

Biggest disappointment was that Roddenberry's "Questor Tapes" didn't get a real run.