SHIVERS and the Birth of Body Horror 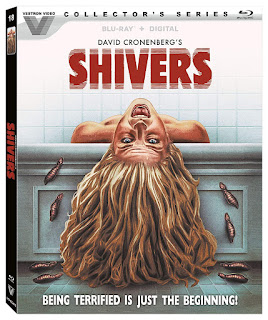 The night I watched Shivers, I had a weird dream where I was being chased by bloody, infected maniacs like the ones in the movie. Leading the charge was co-star Lynn Lowry, only older, as she appears in one of this disc's new bonus features. Just as she was about to lock lips with me, Jeffrey Dean Morgan (who’s not in the movie) came up from behind and shot her. Afterwards, Jeff and I got on my iPad and created the world’s greatest pop song with GarageBand.

I only mention this because I’ve seen so many horror movies over the years that very few of them ever follow me into my sleep. It isn’t that Shivers is scary. Hell, it ain’t even that eerie or atmospheric. But despite some low-budget crudity and amateurism that renders parts of it unintentionally humorous - especially 45 years later - there’s something pretty damned unnerving about the movie as a whole. The fact that it’s so rough around the edges might even be a contributing factor.

As grassroots feature film debuts go, Shivers was to David Cronenberg’s career what Night of the Living Dead was to George A. Romero’s and Last House on the Left was to Wes Craven’s...A calling card with the promise of greater things to come. One could easily argue that, artistically, Cronenberg was the most successful of the three at fulfilling that promise. Shivers is far from his best film, but without it, we may not have gotten such body-horror classics as The Brood, Scanners, Videodrome and The Fly, to say nothing of his more mature movie mind-benders that wowed critics and alienated the yahoo crowd.

Though crude and cheap, with bland characters and questionable performances, this is essentially where body horror was born (in movies, anyway). On a purely visceral level, Shivers is visually and conceptually disturbing, which is pretty impressive considering the limited resources Cronenberg had at his disposal. Overall, it lacks the spit & polish of his more iconic films, but the seeds for them - and every other excursion into body horror - were planted here.

In that context, Shivers is nearly as influential as Night of the Living Dead and Halloween. But even back then, it was obvious David Cronenberg was less interested in scaring an audience than getting under their skin (no pun intended). With hindsight, I suppose it was inevitable that he'd eventually leave the genre behind because, unlike most of his peers, he knew exploring human nature’s nasty side wasn’t necessarily limited to traditional horror.

For this Blu-ray - #18 in the Vestron Collector’s Series - Shivers is nicely restored and comes with a great batch of bonus material, some of which feature Cronenberg himself, who clearly appreciates what it meant to his career. The film itself ain’t exactly a masterpiece, but it’s certainly an interesting look at an audacious director’s humble beginnings and the birth of body horror. The concept alone might even be creepy enough to stick around in your head for a while. Sweet dreams!

TV & RADIO SPOTS - After being retitled They Came from Within for the US.