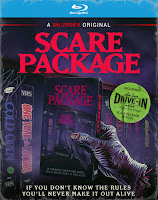 SCARE PACKAGE On VOD / Digital / DVD & Blu-ray 10/20
In SCARE PACKAGE, Chad Buckley is a lonely Horror aficionado, spending his days overseeing a struggling video store and arguing with his only customer, Sam. When an unsuspecting job applicant arrives, Chad sets out to teach him the rules of Horror; weaving in and out of hilarious segments geared toward the ropes and tropes of terror. SCARE PACKAGE was created by Aaron B. Koontz and Cameron Burns of Paper Street Pictures and is directed by Emily Hagins (My Sucky Teen Romance), Chris McInroy (Death Metal), Noah Segan (Knives Out), Courtney and Hillary Andujar (production design on The Wind), Anthony Cousins (The Bloody Ballad of Squirt Reynolds), Baron Vaughn (“Grace and Frankie”) and Koontz (The Pale Door) who all co-wrote the film with Frank Garcia-Hejl (“Ramsey Has a Time Machine”), Ben Fee (Missio: I See You) and John Karsko (After Dark). 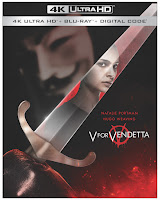 Warner Bros. Home Entertainment announced today that DC’s V for Vendetta, 2005’s thought-provoking action thriller from the creators of The Matrix trilogy, will be released on 4K Ultra HD Blu-ray Combo Pack and Digital HD on November 3, 2020. From producer Joel Silver, V for Vendetta was written and produced by the Wachowskis (The Matrix Trilogy), and stars Natalie Portman and Hugo Weaving.  The film was directed by James McTeigue (Ninja Assassin). V for Vendetta is an electrifying story of an everyday woman in futuristic Britain who becomes the unlikely accomplice of a mysterious freedom fighter in his radical effort to rid the country of oppression.  Based on the powerful graphic novel,  V for Vendetta stars Academy-Award winner Natalie Portman (Black Swan, Thor, Star Wars films), Hugo Weaving (Transformers film series, The Lord of the Rings trilogy, The Matrix trilogy), Stephen Rea (The Crying Game), Stephen Fry (Wilde, The Hobbit film series), John Hurt (Nineteen Eight-Four, the Harry Potter film series), and Tim Pigott-Smith (Alexander, Quantum of Solace). 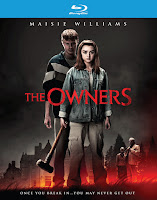 THE OWNERS - On DVD and Blu-ray 10/20
In THE OWNERS, a group of friends think they found the perfect easy score - an empty house with a safe full of cash. But when the elderly couple that lives there comes home early the tables are suddenly turned. As a deadly game of cat and mouse ensues the would-be thieves are left to fight to save themselves from a nightmare they could never have imagined. THE OWNERS  stars  Maisie Williams (“Game of Thrones,” The New Mutants),  Sylvester McCoy  (The Hobbit franchise, “Doctor Who”),  Jake Curran (“Spotless”, Stardust),  Ian Kenny  (Solo: A Star Wars Story, Sing Street),  Andrew Ellis  (Teen Spirit, "This Is England"), and Rita Tushingham  ("The Pale Horse," Vera). The film is directed by Julius Berg (“The Forest,” “Mata  Hari”) who co-wrote the film with  Matthieu Gompel (The Dream Kids). 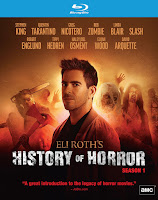 ELI ROTH'S HISTORY OF HORROR SEASON 1 - Available on DVD and Blu-ray 10/6
Award-winning horror film director, writer, producer and actor Eli Roth brings together the masters of horror - the storytellers and stars who define the genre - to explore its biggest themes and reveal the inspirations and struggles behind its past and present. Each one-hour episode will take viewers on a chilling exploration of how horror has evolved through the years and examine the genre's impact on society as well as delving into how horror maintains its fan base and why audiences are addicted to fear. Interviewees include Stephen King, Quentin Tarantino, Linda Blair and many others.