FLYING LEATHERNECKS: The Duke vs. the Prince of Darkness 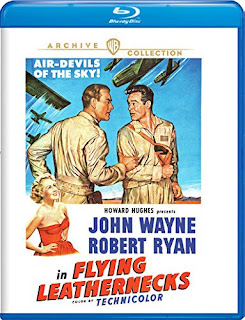 I should probably state upfront that I’ve never been a massive John Wayne fan. That isn't to say he hasn’t been in some undisputedly great films; I just don’t think they were necessarily great because of him. In a way, Wayne’s career was similar to Ozzy Osbourne’s: Not a lot of inherent talent per se, but a supreme knack for surrounding himself with people hired to make him look good.

If a masterpiece like The Searchers is to Wayne’s career what Diary of a Madman is to Ozzy’s, then the loosely-plotted Flying Leathernecks might be considered one of many movies comparable to Ozzmosis: Slick, enjoyable entertainment where the star’s indubitable persona is enhanced by a plethora of talented players, but not particularly memorable compared to his all-time classics.

Flying Leathernecks features The Duke as Major Dan Kirby, who flew during the Battle of Midway. He’s now commanding a squadron of young pilots who previously assumed their beloved captain, “Griff” Griffin (Robert Ryan), would be promoted to the job. In-between airborne skirmishes with the Japanese, most of the ground conflict stems from Kirby's hard-nosed approach versus Griff’s concern over the men’s physical and mental health.

Overall, the film is bereft of any real surprises. The aerial battles - combining special effects and stock footage - are suitably exciting, while things get a bit poky when these guys ain’t in the cockpit. Wayne does what he does best, which is be John Wayne, and that’s fine because nobody ever wanted to hear Ozzy croak-out a country ballad, either. The real MVPs are Nicholas Ray, providing solid direction, and Ryan, who makes a complex foil to Wayne’s stoicism. They serve the same basic purpose as Zakk Wylde, the guitarist largely responsible for making Ozzmosis listenable.

Ultimately, Flying Leathernecks features The Duke at his dukiest. His character doesn’t change a whit throughout the entire movie, which is probably all that most of his fans need to hear. As such, it’s undemanding and enjoyable, but certainly no Diary of a Madman.