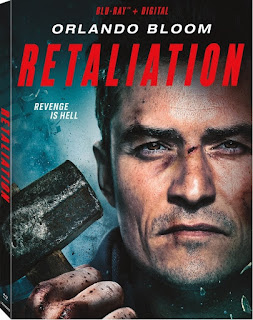 Man, the copywriters and cover artists really earned their paychecks on this one, tasked with touting Retaliation as some kind of action thriller when just the opposite is true. But that’s understandable. Trying to market the film as-is would be a tall order.

The first thing that had to go was the original title, Romans, as in “Book of Romans” from the New Testament. An intriguing title that certainly figures into the theme, which advises against exacting revenge on your enemies because God himself is the ultimate vigilante, but Retaliation sounds a hell of a lot cooler and a lot less high-minded

Second, slapping a photo on the box featuring its bruised, glowering star (Orlando Bloom) clutching a giant hammer definitely suggests some rousing bits o’ brain-bashing. However, it’s simply what main character Malky (Bloom) uses at his job, part of a demolition crew that’s in the process of bringing down an old church (which is also a terrible part of Malky’s past).

The story and subject matter are much darker than the synopsis suggests. Drinking at a local hangout with work buddies, Malky spots the man who raped him as a child, a popular, respected priest who has returned after 25 years to oversee the parish of the new church. Prior to this, Malky was already an emotional trainwreck: self-loathing, short-fused and prone to self-harm (which includes ‘raping’ himself). Seeing the priest again causes him to completely fall apart.

He wants revenge, but has silently carried the shame of the incident for so long that he’s unable to confide in those still close to him, including girlfriend Emma (Janet Montgomery) and his ailing mother (Annie Reed), who refused to believe Malky about the incident 25 years ago. Only another priest, Paul (Charlie Creed-Miles), understands his pain and tries convincing Malky to avoid retaliation because, according to the Book of Romans, the man who raped him will eventually receive his reckoning from God. However, being that he doesn’t interact with anyone else and seems to pop up whenever Malky is most vulnerable, Paul might actually be a figment of his imagination.

Unremittingly bleak and emotionally brutal, Retaliation is not the violent revenge fantasy one might be expecting. But that’s not to say it isn’t without merit. The film addresses sexual abuse with empathy, so while we may not condone much of Malky’s behavior, we certainly understand it. Part of us really wants to see him have his revenge in the most violent way imaginable, but the other part fears what will happen to what’s left of his humanity if he does. At the center is Orlando Bloom with an all-in performance that can most accurately be described as brave (and sometimes hard to watch).

The subject matter and themes are certainly worth exploring and Retaliation handles them pretty well, but it’s really tough sledding and might give would-be thrill seekers a bit more than they probably bargained for. It must’ve taken those ad guys forever to figure out how to spin the thing as just another revenge thriller. Maybe that’s part of the reason it took three years for the film to be released domestically.

“BRUTALITY AND HONESTY: THE MAKING OF RETALIATION” - 20 minute featurette