GHOST IN THE SHELL Gets an Upgrade 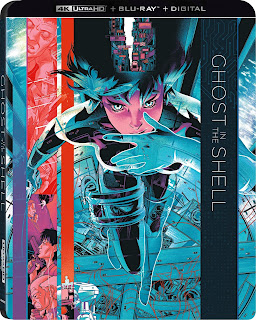 Ghost in the Shell is anime’s Star Wars (though a few hard-core fanboys might throw their hat in the ring for Akira). Extraordinarily influential, it more-or-less dragged the genre kicking and screaming into mainstream Western culture. For better or worse, the film’s impact is still being felt, not-only on anime itself, but science-fiction films in general.

Like a lot of cerebral brain-benders, there are two ways to watch this film. The first, of course, is to delve into the challenging plot, exploring its themes and contemplating the questions they raise. The second is kick back with a cold one and simply let it flow over you, immersing in the tone and aesthetic rather than trying to decipher what the hell is going on in every scene.

I choose the latter because I find the plot just as overwhelming now as I did 25 years ago. Unlike such conceptually kindred spirits as Blade Runner or The Matrix, watching Ghost in the Shell is like attending a college lecture where you’re paying attention, but apparently not enough attention. Like that class’s indifferent professor, the film never slows down for the viewer to digest its story complexities, unconcerned whether or not you’re taking notes.

So I don’t concern myself, either. Similar to 2001: A Space Odyssey, Ghost in the Shell has always been more of a sensory experience than a narratively compelling one. For me, the best moments have nothing to do with the story, such as the dialogue-free sequence that’s essentially a grand tour of dystopian Tokyo. Presented in long takes, accompanied by nothing but Kenjo Kawai’s haunting score, it’s like viewing a series of vivid animatic paintings. Though I’m not a massive anime fan, the film is constantly engaging just to look at, nearly every scene so rich with detail that catching everything in one sitting is impossible...

...all of which looks and sounds impressive on this 4K Ultra release. With only the accompanying Blu-ray to compare it to, I noticed the overall enhancements render the film even more immersive. Since it also comes with substantial new and archival bonus features (outlined below), this disc is a considerable upgrade from any previous version. For fans - or anyone simply looking to zone-out on the sofa with some serious eye candy - it’s worth grabbing.

“LANDSCAPE & DREAMSCAPES: THE ART AND ARCHITECTURE OF GHOST IN THE SHELL” - All-new look at the artwork used in the backgrounds. These paintings really are pretty cool.