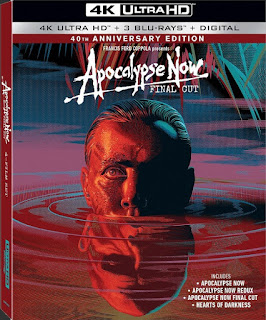 I didn’t come up with that review headline. It was the title of a segment from the news show, 20/20, when they did a feature on Apocalypse Now just as it was first being released. While I personally have an ongoing love/hate relationship with the film, 'wow' certainly applies to this massive 6-disc release.

Apocalypse Now Final Cut features yet-another edit of the Francis Ford Coppola classic, newly remastered in 4K and overseen by the director himself. While this cut alone makes the set indispensable for any cinephile, the original theatrical version and 2001’s extended Apocalypse Now Redux are thrown in for good measure.

I’ve always viewed the theatrical version as a flawed masterpiece, a film loaded with astounding moments and striking imagery, but the whole never quite equaling the sum of its parts. There was always something about it that felt incomplete, particularly the final act. Coppola apparently agreed, since Apocalypse Now Redux restored nearly an hour of deleted footage. Some of the new stuff was interesting, even humorous, but the lengthy plantation & Playmate scenes bloated Willard’s already-lengthy journey down the Nung River without adding anything substantial to the narrative.

Final Cut finds the sweet spot between the two. The additional Playmate segment plopped into Redux is gone, while the plantation sequence is mercifully shortened, leaving just enough to expand on the film’s themes and shed more light on Willard’s character. Elsewhere, various scenes are expanded or streamlined, and I’m happy to say my favorite addition to Redux  – where Willard and his crew steal one of Kilgore’s precious surfboards – is still here, providing a rare moment of levity. While still running three-hours, Final Cut is faster-paced then Redux and a richer experience than the original, arguably making it the definitive version.

Though I’m still not all-in on 4K Ultra HD, Apocalypse Now’s striking aesthetics are undoubtedly conducive to the format. This set includes 4K, Blu-ray and digital copies of all three cuts. Technically speaking, the film has never looked or sounded better. Also included on Blu-ray is Hearts of Darkness, Eleanor Coppola’s critically-acclaimed documentary on the film’s tumultuous production. It’s part of two discs’ worth of new and vintage bonus features (outlined below), the best of which is a recent Q&A session between Coppola and director Steven Soderbergh, which was filmed at Apocalypse Now Final Cut’s 2019 4K premiere. In a word...wow.

For a classic film that continues to be extensively discussed, debated and written about, Apocalypse Now Final Cut adds more fuel to the fire. This author feels the new version is as close to perfect as the film will ever get (I still have issues with the ending, though I’ve learned to appreciate it). Opinions vary, of course, which is part of the fun of having all three cuts collected as evidence. For that reason, this beautifully-packaged set is a must-own even for those who’ve already purchased the film several times.

MEE-OW! LIKE TAUNTING A MOUSE TO DEATH.
Posted by D.M. Anderson at 4:39 PM