ROXANNE and a Tale of Compromise 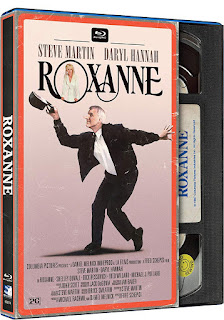 If you’re of a certain age, perhaps this sounds familiar…

Back in the late ‘80s, my young wife, Francie, and I would often venture to our local video store, grabbing a batch of movies to enjoy over the weekend. People often say opposites attract, an old adage that certainly applied to our entertainment choices (and still does, for the most part). Francie mostly enjoyed lighter fare – romance, comedy, fantasy, romantic comedy, romantic fantasy, romantic fantasy comedy. You get the idea. While I don’t necessarily hate those genres, I generally got my jollies from darker, weirder, more violent stuff.

Here’s what a great husband I am: We always watched Francie’s movies first, since she had little-to-no interest in many of my choices and I was more of a night-owl, anyway. Hence, I ended up sitting through a lot of movies I would never have chosen on my own (though Francie deserves credit for introducing me to The Princess Bride).

All successful marriages involve a bit of compromise and I’m pretty sure one of those compromise movies was Roxanne, Steve Martin’s romantic comedy update of Cyrano de Bergerac. A Francie movie if there ever was one, I was fairly ambivalent about it. Having grown up on the “wild and crazy” Steve Martin from The Jerk and his off-the-wall comedy records, it was a bit disheartening that he was slowly leaving that persona behind.

Still, Martin is a good actor and Roxanne demonstrates his maturity as a screenwriter. Whether that latter point is good or bad is subjective, but Roxanne nevertheless remains a critical and fan favorite. As his romantic comedies go, it’s probably Martin’s sweetest film. Comparatively speaking, it’s more charming than The Lonely Guy, though not as funny as All of Me (which benefited from Martin’s increasingly underused talent as a physical comedian).

I enjoyed the movie back then, though like most of Martin’s ‘80s films, it wasn’t anything I felt compelled to revisit. Seeing Roxanne again all these years later was more of a nostalgic experience than anything else, especially with this retro-packaged cover by my side. It looks almost exactly like the very box that once sat between Francie and I on the sofa (complete with stickers indicating what video shelf it belongs on). It’s been released on Blu-ray before and while this re-issue adds no bonus features, the cover art makes it a fun purchase for those who fondly recall renting VHS tapes with that significant other.