ROCKETMAN: The Bitch is Back 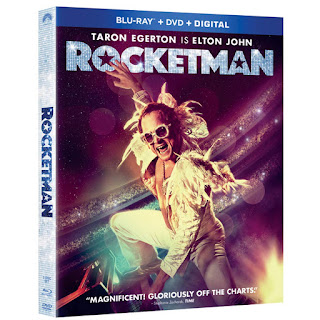 Since we all really liked Bohemian Rhapsody, I took my entire family to see Rocketman when it was released in theaters. I’ve always enjoyed music bios, and particularly interesting are those about artists I clearly remember at the height of their popularity. Like Queen, Elton John’s music was a big part of my childhood.

I tend to pay little attention to press or reviews of movies I’m already intent on seeing, so other than its subject, its star (Taron Egerton) and obviously the music, I knew relatively little about Rocketman going in. Considering his wild life and countless classic songs, any movie with Elton John as its subject would be inherently interesting.

But as the film opened, something unexpectedly wonderful happened. Decked-out in one of his trademark stage costumes, a worn and weary Elton John sits down with a support group and counts-off his numerous addictions. When the counselor asks about his childhood, John begins to quietly sing. Though it sounds like a melancholy ballad, I recognized the lyrics to “The Bitch is Back.” The scene morphs into a huge production number taking place on the street of his childhood home, with dancers, back-up singers and a young Reggie Dwight (Elton’s real name) belting-out the sassy chorus.

My wife gasped in surprise. My musical-loving oldest daughter quickly clapped with joy. The unexpected rush I felt was the same as when I first saw that massive Imperial Star Destroyer enter the top of the frame in the opening scene from Star Wars. Rocketman wasn’t just a music bio...it was a full-blown musical.

With 20/20 hindsight, of course it is. How could any movie about rock & roll’s most fearlessly flamboyant frontman not be?

I suppose comparisons to Bohemian Rhapsody are inevitable, though not entirely fair. Both take dramatic liberties with the facts and timeline, but Rocketman is more than an episodic love letter to its subject. Elton’s life and songs are basically re-imagined, not only for dramatic purposes, but to turn his story into an epic musical fantasy with the glamour and audacity befitting of its subject. The film is filled with brilliantly-conceived musical numbers featuring his best-known songs. But they aren’t isolated pieces of gratuitous window dressing. The numbers are sequenced in a manner that they become part of the narrative and the songs themselves feel almost autobiographical, despite the varied lyrical subject matter.

Though only superficially resembling Elton John, Taron Egerton’s performance is every bit as remarkable as Rami Malek’s portrayal of Freddie Mercury, plus he does his own singing (as does the rest of the cast). As depicted in the film, John is a complicated character who is – by turns – insecure, lonely, egotistical, self-loathing, resentful, sensitive, petty and narcissistic. Egerton convincingly demonstrates all those traits, yet still keeps his character likable. Otherwise, sequences featuring "Saturday Night's Alright for Fighting," "Crocodile Rock" and "Rocket Man" wouldn't be nearly as engaging, nor would we care whether or not he wins the battle against his demons.

Regarding Elton John’s sexuality, Rocketman is certainly braver than Bohemian Rhapsody, but that’s not ultimately what makes it a better film. The narrative is more cohesive, the main character more complex and his story more vividly presented, enhanced by knock-out musical numbers. It’s as fun as Elton’s songs and – so far – the most purely entertaining movie of the year. 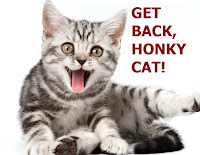 MEE-OW! LIKE BEING TURNED LOOSE IN A BIRD SANCTUARY.
Posted by D.M. Anderson at 9:39 PM