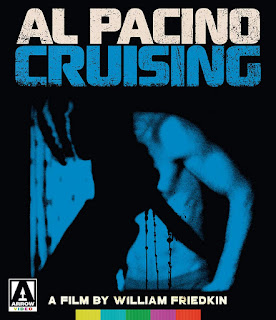 William Friedkin directed three of the greatest films of all time, The French Connection, The Exorcist and Sorcerer. That he made them consecutively in a span of six years is remarkable. Even though he’s been a shadow of his former self ever since, Friedkin remains one of my favorite directors and I never pass up the opportunity to check-out his work. There’s always the chance he has another great film left in him.

Cruising ain’t that film, but historically, it might be Friedkin’s most perversely fascinating.

Critically reviled and very controversial when first released in 1980, Cruising remains polarizing and provocative four decades later. From a creative standpoint, it’s widely regarded as a black stain on the careers of both Friedkin and Al Pacino, from which the former never fully recovered. Though one could argue Friedkin’s undoing actually began with Sorcerer, that film has-since grown in stature by both critics and audiences (deservedly so). Camp qualities notwithstanding, Cruising has been more difficult to appreciate, perhaps due to its subject matter (or at-least how it’s presented).


Most of Cruising’s controversy stemmed from its depiction of gay subculture, most notably the S&M-oriented nightclub scenes, which outraged members of the gay community. Watching it today, one can kind-of see why. With one notable exception, every gay character is portrayed as a lecherous horndog ready to fuck anyone, anywhere, any time. The sweaty, explicit club scenes (and there’s a lot of them) are lurid and sensationalistic, playing like a calculated attempt by Friedkin to shock the viewer with their frankness. It’s probably the closest to pure exploitation he’s ever gotten (well, at least until Jade came along).

These scenes tend to overshadow the actual plot, a murder mystery which has ambitious young cop Steve Burns (Pacino) going undercover to try and nab a serial killer who’s been targeting gay men in the West Village district of New York. He finds himself increasingly drawn into this subculture, which not-only has him conflicted, it affects his relationship with his girlfriend. But those aspects are only superficially explored and Burns never comes across as being very proficient at his job.

Still, there’s a bizarre trainwreck quality to Cruising that remains morbidly compelling, especially considering the talent on both sides of the camera (like witnessing a fatal car crash with Mario Andretti behind-the-wheel). Pacino throws himself into the role, often hilariously so, his nightclub dance scene being an unintentional comic highlight. Despite the impressive cast – including plenty of familiar faces unknown at the time – the best performance actually belongs to Don Scardino as the only character who isn’t a gay stereotype. As a director, Friedkin still knows how to set-up his shots. But while there are visual moments reminiscent of The French Connection, he doesn’t appear to be as concerned with the story itself, seldom bothering with details which don’t involve kinkiness or violence (or both). His self-penned screenplay also shows he’s better off leaving the writing duties to someone else, since the dialogue contains some real howlers.

As William Friedkin’s most notorious film, Cruising can’t be dismissed entirely. From a historical standpoint, the controversy alone renders it required viewing, since viewers should make up their own minds whether or not it’s warranted. The bonus features included with this Blu-ray release provide some valuable context, and for newcomers, it might even be prudent to watch those first. But controversy aside, Cruising remains a campy curiosity not unlike Mommie Dearest or Myra Breckenridge.

EXTRA KIBBLES
2 FEATURETTES - “The History of Cruising” & “Exorcising Cruising.” Both of these 20 minute featurettes are entertaining and informative, the second one being the more interesting since it looks back at the controversy surrounding the film.
2 AUDIO COMMENTARIES – The first is brand new, featuring Friedkin and critic Mark Kermode, the second is an archival commentary by Friedkin.
SUPPLEMENTARY BOOKLET – Includes cast & crew credits, restoration credits and an essay by filmmaker/critic F.X. Feeney.
TRAILER
REVERSIBLE COVER – Though the artwork for both is very similar.