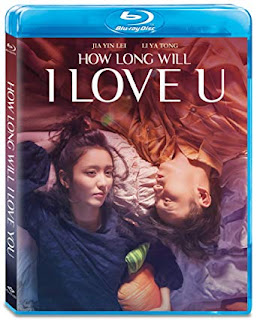 Lu Ming (Jia Yin Lei) is a lonely building designer whose efforts and talent are ignored at work. Gu Xiaojiao (Li Ya Tong) is trying in-vain to land herself a rich husband willing to buy her a house. Suddenly, they are forced to share the same small apartment. The twist? They are actually living 19 years apart, the result of a time-displacement experiment that forces them to co-exist.

Like your typical romantic comedy, they don’t get along at first. Lu is put-off by Gu’s self-serving shallowness, while she doesn’t mask her contempt for his lowly financial status. However, they eventually open up to each other and...well, you can probably figure out the rest.

But it’s the sci-fi trappings that make How Long Will I Love U interesting, for awhile, anyway. The way the film establishes the rules of its premise leads to some amusing and intriguing moments. For example, whenever Lu opens the front door, it’s 1999; when Gu does, it’s 2018. But even though they can physically exist in each other’s time, they can’t manipulate it, as demonstrated when their plan to get rich by acquiring winning lottery numbers doesn’t work. Additionally, meeting their past or future selves has dire physical consequences, which is eventually the crux of the story.

Much of this is entertaining, particularly the scenes where Lu and Gu discover their limitations (often the hard way). Their chemistry also makes the romantic aspects of the story sort-of charming (though free of surprises). Unfortunately, the film turns a bit too serious for its own good during the second half, when new plot elements are introduced, some of which are either unnecessary or a bit too coincidental to swallow. And what’s up with those nonsensical end-credit scenes?

Still, How Long Will I Love U is fairly engaging, with some interesting special effects and congenial performances by the two leads. I don’t how well the plot would hold up to any real scrutiny, but as a romantic comedy with sci-fi touches, it works in the moment.