Rue Morgue Magazine and MVD Entertainment to launch MIDNIGHT MOVIE SOCIETY
MVD ENTERTAINMENT GROUP and RUE MORGUE have teamed up to launch the MIDNIGHT MOVIE SOCIETY, a curated Subscription Video on Demand (SVOD) service specializing in Extreme Underground, Taboo and Cult Horror movies. Now genre fans can gain access to a film library of shocking underground, outrageous gore, creature features, cult classics and much more. Those with a taste for the weirdest and wildest reaches of genre cinema will not be disappointed!

"The bigger platforms are catering to the masses and have gone puritanical in many cases, making it very difficult for filmmakers to reach their audience," says Ed Seaman, C.O.O. of MVD ENTERTAINMENT GROUP. "MVD has a great deal of this type of content and when it is live on major platforms, it performs really well. Maybe too well for some of the mainstream platforms." MIDNIGHT MOVIE SOCIETY will also cater to more traditional horror fare as well, pulling from the thousands of film hours from in MVD's vast catalog. In addition, RUE MORGUE will also be finding and curating fresh and unusual content for the service.

MIDNIGHT MOVIE SOCIETY will be available for $4.99 per month, or $47.88 per year subscription, and will launch on iOS, Roku and web on Friday the 13th, September 2019.

TOY STORY 4 on Digital 10/1 and Blu-ray, 4K UHD 10/8
Fans who bring home “Toy Story 4” will be treated to over an hour of bonus features celebrating the film’s iconic characters, Pixar’s filmmaking team and the legacy of “Toy Story,” which began as the world’s first fully computer-animated feature film released nearly 25 years ago. Extensive extras includes deleted scenes such as an alternate ending, an all-new featurette with an endearing look back on Woody and Buzz’s legendary friendship throughout the years; entertaining studio stories shared by members of the Pixar team; a nostalgic look back at the creation and first storyboard screening of “Toy Story” with filmmakers; and the pioneering efforts of Pixar artists who created the sets, characters, look and feel of the original film and much more.

ANNA on Digital 9/10 and 4K, Blu-ray, DVD, On Demand 9/24
Introducing Sasha Luss in the title role, Luke Evans, Cillian Murphy, and Oscar winner Helen Mirren (2006, Best Actress, The Queen) kick ass in this stylized action-thriller about one of the world’s most feared government assassins, Anna Poliatova. Written and directed by Luc Besson (La Femme Nikita, Lucy, Valerian and the City of a Thousand Planets), the film is an action-packed thrill ride that will keep you on the edge of your seat from start to finish. Experience sensational fight sequences in four times the resolution of full HD with the 4K Ultra HD Combo Pack, which includes Dolby Vision, bringing the action to life through ultra-vivid picture quality. Includes never-before-seen featurettes. 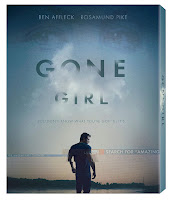 GONE GIRL (2014)
David Fincher is one of the few living directors who has yet to make a terrible film (no, not even Alien 3). Not that we’ve actually liked everything he’s done, but all of them – yes, even Alien 3 – are meticulously directed, just slightly off-center and have at-least a scene or two you’re not likely to have seen anywhere else. Gone Girl may not be his greatest, but it’s certainly intriguing and this set we found in a Best Buy budget bin includes “Amazing Amy: Tattle Tale,” an illustrated ‘children’s’ book related to the film. And yes, it’s better than Alien 3. $5.99 AT BEST BUY.
Posted by D.M. Anderson at 10:18 AM