METALLICA & SAN FRANCISCO SYMPHONY: S&M² in Theaters 10/9
Celebrating the 20th anniversary of the 1999 performance and Grammy-winning S&M album, Metallica & San Francisco Symphony reunite for S&M². The film will feature the first live performances of S&M arrangements in 20 years plus renditions of songs written and released since original show. TICKETS ON SALE TODAY AT METALLICA.FILM


"FEAR INOCULUM”: The Title Track from TOOL’s First New Album in 13 Years.
Though not necessarily movie related, Tool is one of the few bands left that still gets our motors running. Seven songs, 85 minutes. What’s not to love? The album will be released an August 30. In the meantime, check out the prrrfect title track above.

PUT DOWN THE REMOTE FOR AWHILE...

Strange Blood encompasses well-known hits as well as obscurities that differ from your standard fang fare by turning genre conventions on their head. Here, vampires come in the form of cars, pets, aliens, mechanical objects, gorillas, or floating heads. And when they do look like a demonic monster or an aristocratic Count or Countess, they break the mold in terms of imagery, style, or setting. Leading horror writers, filmmakers, actors, distributors, academics, and programmers present their favorite vampire films through in-depth essays, providing background information, analysis, and trivia regarding the various films. Some of these stories are hilarious, some are terrifying, some are touching, and some are just plain weird. Available at Amazon.com 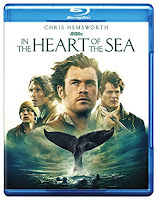 IN THE HEART OF THE SEA
Typically, a trip to my local Walmart has slightly more appeal than a visit to the DMV. However, digging through their Blu-ray budget bin occasionally unearths something that makes it worth the effort. Just recently, I found Ron Howard’s megabomb, In the Heart of the Sea. While it’ll never be mistaken for a classic, it looks pretty and provides your only opportunity to catch Tom (Spider-Man) Holland crawling around inside a whale’s gut. $5.99 at Walmart.
Posted by D.M. Anderson at 9:42 AM