FREE KITTENS MOVIE GUIDE is giving away a Blu-ray copy of UNIVERSAL's THE HUSTLE to one lucky reader.
Available on Blu-ray, DVD 8/30 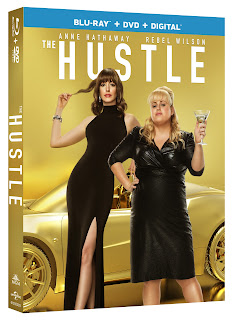 Two women put the “art” in con-artist in the outrageously fun comedy, THE HUSTLE, arriving on Digital August 6, 2019 and on Blu-ray, DVD and On Demand August 20, 2019 from Metro Goldwyn Mayer Pictures (MGM) and Universal Pictures Home Entertainment. The film stars Academy Award winner Anne Hathaway (Ocean’s 8, The Devil Wears Prada) and Rebel Wilson (Isn’t It Romantic, Pitch Perfect) who show off their electric chemistry playing scam artists from different worlds who join forces to take down the dirty rotten men who have wronged them. Filled with wildly entertaining and empowering moments from beginning to end, THE HUSTLE whisks audiences away to a world of luxury and glamour set in a stunning seaside town in the south of France.
From director Chris Addison (“Veep”) and producers Roger Birnbaum (The Magnificent Seven) and Rebel Wilson, THE HUSTLE on Blu-ray and DVD showcases bonus features taking viewers further into the world of scamming with special featurettes including behind-the-scenes footage, commentary from the cast and filmmakers, and more!

TO ENTER: Simply drop us a message at freekittensmovieguide@gmail.com. CONTEST ENDS 8/20.
Posted by D.M. Anderson at 9:21 AM