The "Fine" Line in LADYWORLD 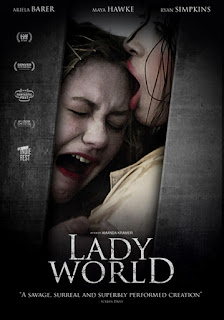 Ladyworld is an all-female spin on Lord of the Flies in which a gaggle of teenagers at a birthday party become trapped inside a house after a cataclysmic event. We’re led to believe it’s an earthquake, though it’s never made quite clear, which is fine because it’s the survival scenario that matters.

And I guess I can overlook the fact that even though the house has sunk a bit, there's clearly still plenty ‘o room to climb out through the windows. But hey, it’s obvious writer-director Amanda Kramer has loftier ambitions than plausibility or realism. That’s fine, too. Perhaps Ladyworld will instead tell us something about human nature and social breakdown under dire circumstances.

And indeed, the group breaks into to factions. One is led by Olivia (Ariela Barer), who’s more level-headed and empathetic. Conversely, bitchy & cruel Piper (Annalise Basso) is perpetually antagonistic and eventually rallies a few of the others around her. The other characters, including one played by Maya (Stranger Things) Hawke, are mostly window dressing. Even that’s fine, since a film’s underlying theme sometimes takes precedent over traditional story elements.

Unfortunately, the film is stuck with a drab setting, underdeveloped & unlikable characters, superficially-abstract dialogue and – hands down - the most grating, obnoxious “music” score I’ve ever heard (human voices grunting, screeching, chirping and wailing). Once it’s established they’re trapped, the plot descends into a series of vignettes that are self-consciously performed ("look at me act!") and grow increasingly pretentious, to say nothing of tedious.

Some viewers might find the girls’ surrealistic descent into savagery disturbing. But for the most part, Ladyworld succumbs under the weight of its own arty ambitions. That, dear readers, is not fine.

BLEH! LIKE COUGHING UP A HAIRBALL.
Posted by D.M. Anderson at 10:55 PM