SHORTCUT TO HAPPINESS: Adequacy in Action 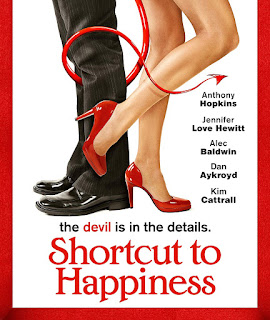 Despite its rather impressive cast, there’s a good chance some of you have never heard of Shortcut to Happiness. However, this one has a tumultuous history that is ultimately more interesting than the film itself.

Shortcut to Happiness began life as The Devil and Daniel Webster, an updated adaptation of the classic short story by Stephen Vincent Benet. The first – and to-date, only – film to be directed by Alec Baldwin, it was shot in 2001. However, it ran into post-production funding issues and sat on the shelf for a few years. The film was later purchased by another company, heavily re-edited & given a new title. Apparently, the changes were so massive that Baldwin had his name removed as director. The final product was unceremonially released in 2007, coming-and-going without anyone really noticing. And only now is it creeping its way onto home video.

No bonus features are included, which is sort-of a shame since films with troubled productions generally have the most interesting histories. So we have no idea how the final cut differs from Baldwin’s. As it is, Shortcut to Happiness may not be all that memorable, but it’s far from a black stain on his resumé.

Updating the story to present-day New York, Jabez Stone (Baldwin) is a down-on-his-luck writer who makes a deal with the devil (Jennifer Love Hewitt) in exchange for the success he’s always wanted. Of course, what constitutes success isn’t what he envisioned. He goes to his publisher, world-renowned Daniel Webster (Anthony Hopkins), for guidance. It turns out Webster has dealt with the devil before and suggests they take her to court.

It’s a classic story, adapted and reworked countless times before-and-since in various movies, books and television. Comparatively speaking, the word that best-describes Shortcut to Happiness is adequate. Adequate direction, adequate writing and adequate performances by a cast that puts adequate effort into their roles. The story efficiently moves from one scene to the next, checking-off all the required boxes. But at no time does the film aspire to be anything more. It’s content to retell an already familiar tale without putting any kind of unique spin on it. There are no surprises, no twists, no memorable moments and – with the possible exception of Hopkins – no stand-out performances.

While it’s doubtful the viewer walk away thinking it’s 106 minutes they won’t get back, Shortcut to Happiness is as generic as its title. The film is certainly watchable – even enjoyable – but likely to fade from memory as swiftly as it once did in theaters. Maybe Baldwin’s original vision was decidedly different, but I guess we’ll never know.