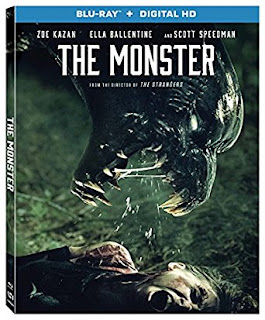 The Monster is one of those films where admiring its craftsmanship and performances isn't quite the same as actually enjoying it. I felt the same about writer/director Bryan Bertino's first film, The Strangers, though I suspect I'm in the minority on that.

Kathy (Zoe Kazan) is an alcoholic, abusive single mom who's taking her neglected young daughter, Lizzy (Ella Ballentine), to live with her father. It's a long drive, during which time we learn Lizzy is far more mature and responsible than Kathy. As night falls on a rainy, desolate stretch of road, they crash and Kathy is injured. The two are forced to wait for help to arrive. Shortly after a tow truck driver shows up, the title creature emerges from the surrounding woods and slaughters him. Not only are Kathy and Lizzy stranded, they are now trapped in the car with that thing lurking about.

The film is similar in structure to The Strangers; deliberately-paced in order to establish its characters before plunging them into terror, and emphasizing suspense & atmosphere over cheap shocks and gratuitous gore. The beast itself is impressive - imposing, slimy and consisting mostly of teeth - a prime example that CGI is still no substitute to good old fashion practical effects. As for the performances...they are exemplary, especially young Ballentine in what's obviously the most crucial role (how often have we seen other horror films sunk by an amateur child performance?).

However, The Monster is already a depressing experience before the title creature even shows up. While I'm perfectly fine with horror being dark and bleak, we're subjected to more flashbacks than necessary showing Lizzy's dysfunctional home life. Her mother is an irredeemable drunk who verbally and physically abuses her. Lizzy's father (Scott Speedman, in a single scene) isn't much better, drunkenly berating her for hiding his car keys. Having been raised by monsters, she's already the most unhappy child character I've seen in a long time.

That overall tone of hopelessness runs throughout the film, sucking much of the enjoyment out of watching. I'm not opposed to Bertino infusing realism into his stories through his characters, but here he feels the incessant need repeatedly hammer home the horror of Lizzy's life long after we've gotten the message. Even The Mist, despite its emotionally devastating moments, still managed to be fun. Still, The Monster is well directed and intelligently written, with convincing visual effects and a few nifty death scenes. Fans of Bertino's down-to-Earth – and downbeat – sensibilities will probably love it.

NOT BAD...BUT NOT PARTICULARLY FUN EITHER
Posted by D.M. Anderson at 7:13 PM

I was very bored watching them scream at each other through constant flash backs. Even a little lost because of the constant flashbacks. Overall I could take it or leave it. Needed more monster brutality.