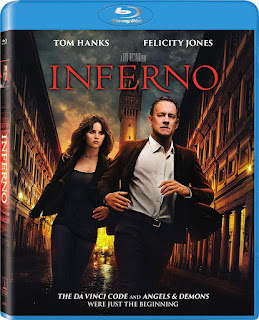 We have to address an elephant in the room. Two elephants actually, and as pachyderms go, both are big ones, which Inferno does a lamentable job distracting us from.

One elephant is the film's basic premise, which we're informed of almost immediately. Bertrand Zobrist (Ben Foster) is a brilliant geneticist and billionaire who ominously informs us that the rate at which our population continues to grow will inevitably result in our extinction unless something is done right now. Whether or not his sobering timeline is scientifically accurate isn't really an issue; we'll accept it for the sake of the story.

Zobrist's solution is to release a virus - dubbed "Inferno" - which will kill half the world's population. Yes, it's an awful idea to contemplate, yet Zobrist is not depicted as malevolent megalomaniac or evangelical nutjob. He has almost no personality at all, serving mostly as an expository talking head (meaning Foster's talent is wasted). In fact, there's such a twisted logic to his plan that a dark part of the viewer might question if Robert Langdon really should come to the rescue.

The other elephant is the fact that Zobrist hides the virus somewhere in Europe, then purposefully leaves a Dante-related trail of clues to its location before jumping to his death. Enter Langdon, suffering from amnesia due to head trauma, and young doctor Sienna Brooks (Felicity Jones) to try and find it before it's too late. Others, such as members of the World Health Organization and a mysterious security firm led by the ruthless Harry Sims (Irrfan Khan), give chase, either to kill Langdon, locate the virus, or both.

This begs a nagging question: why does Zobrist bother leaving any clues in the first place? Even taking into account the revelation that shows us the individual for whom they're actually intended, this doesn't make a whole lot of sense. If Zobrist is that smart and truly wants to save the whole world by sacrificing half of it, why provide the elaborate puzzle at all? Why not just release the damn thing and call it a day?

Yeah, I know...there would be no movie otherwise. There would be no Speed, either, if Jack Traven had the foresight to simply shoot out the bus's tires before it reached 50. However, that movie was so much ridiculous fun that at-least we could shoo-away the elephant until after the credits rolled. But Inferno, the third film based on Dan Brown's mega-popular novel series, is no Speed. While the film isn't without its merits, those two tenacious elephants refuse to leave the room, casting a glum shadow over everything. Whether Langdon saves the day or not, by the film's own logic, either outcome is ultimately going to be an tragic one.

But never mind. Inferno is just a movie, even if it is phenomenally self-contradicting. We're not suppose to scrutinize this stuff too heavily, anyway, and if the plot were more carefully conceived, we probably wouldn't (at least 'till later). Still, if you can't get enough of Langdon's exploits and have a big enough can of pachyderm repellent handy, Inferno works in fits and starts. Hanks is solid, as usual, though Khan steals the movie as an unflappable, cold-blooded mercenary. The numerous plot twists and red herrings range from clever to ridiculous. Director Ron Howard is once-again slumming here, though he does keep things moving at a fairly brisk pace, always jetting-off to another exotic location just when our interest threatens to wane.

Inferno isn't as much frenetic fun as Angels & Demons, which threatened to venture into Die Hard territory. But even with the absurd premise and sloppy story, it's a damn sight better than the original snoozefest,The Da Vinci Code.

NOT BAD...BUT TOO MANY DAMNED ELEPHANTS
Posted by D.M. Anderson at 10:02 PM