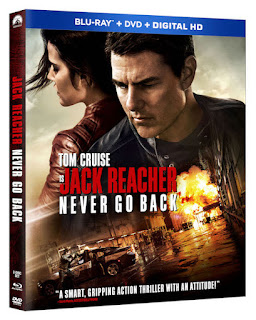 I never cared for most of Tom Cruise's early career (no, not even Top Gun), unable to escape the notion that his roles were customized to fit the image he had of himself. Even in the more "prestigious" movies where he attempts to be taken seriously as an actor, his meticulously self-cultivated movie-star persona makes that impossible. He's simply too Tom Cruisey to be accepted as anything else.

Though not exactly a blockbuster, 2012's Jack Reacher (a.k.a. The One Where Tom Cruise Takes the Bus to Save the Day) was quintessential Cruise, albeit a bit more down-to-Earth than the Mission: Impossible series. No classic, but a solid action-thriller that allowed Tom to further perfect his head-exploding stare while kicking everyone's ass, offer groan-worthy threats to hapless thugs and outwit everyone in the room. The film itself was just standard stuff, but his utter earnestness was entertaining enough (and often quite funny) to make it a home video hit.

Jack Reacher: Never Go Back isn't as fresh or fun as the original. Sure it's great to see Cruise jump off the bus and commence cracking skulls, but the plot is a bit more convoluted and predictable. This time, he comes to the aid of Major Susan Turner (Cobie Smulders), who's been framed for the murders of two subordinates in Afghanistan. After Reacher is framed for her lawyer's brutal murder, the two become fugitives, hunted by police, the Army and a mysterious assassin (Patrick Heusinger) hired to kill them before they uncover the truth behind the Afghanistan murders. Complicating matters is Samantha (Danica Yarosh), a 15-year-old who may or may-not be Reacher's daughter.

The plot is fairly standard stuff, devolving into the usual shady drug and weapons deals before all is said and done. As Reacher, Cruise is his usual intense self, and when left alone to dispatch thugs and almost single-handedly uncover clues, this sequel is a lot of fun. However, he is saddled with an obnoxious teenage kid who mostly exists as a plot device, doing stupid things which repeatedly puts them in danger. Samantha's frequent switches from smart & resourceful to dumb-as-dirt (depending on what the scene requires) sometimes threatens to torpedo the whole movie. Major Turner, on the other hand, is a tough, terrific character who nearly matches Reacher's stoic badassery.

But it's still Reacher's movie, which of course mean it's Tom Cruise's movie (he's fast becoming his own little genre). I confess I've not read any of the Lee Child novels on which these films are based, but while Tom Cruise didn't create the character, he's made it his own. As such, Jack Reacher: Never Go Back more-or-less delivers as promised and, like the first, probably plays better at home than it did in theaters.