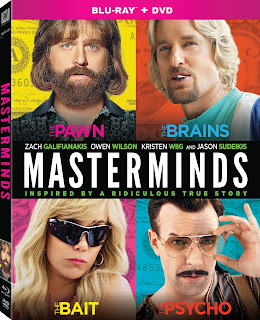 I know it's only February, but Masterminds stands a decent chance of being the worst movie I'll review on Blu-Ray all year. Why? Because it's worse than anything I reviewed last year.

By that, I don't mean bad. I subject myself to lots of bad movies every year because not everyone can be Spielberg, have $50 million at their disposal and Daniel Day Lewis on-board. What makes Masterminds worse than bad is the enormous waste of talent on both sides of the camera, not to mention a squandered opportunity by turning a rather remarkable true story into a juvenile, lowbrow comedy loaded with cartoon caricatures. But even that could be forgiven if the film were even remotely funny.

The true story in question is a robbery that occurred in 1997, masterminded by Steve Chambers (played here by Owen Wilson) and carried out by armored truck driver David Ghantt (Zach Galifianakis), who's duped by his infatuation with former co-worker Kelly Campbell (Kristen Wiig), though she's actually in cahoots with Chambers.

A bumbling, dim-witted rube, Ghantt flees to Mexico to keep a low profile on the promise they'll all hook up once the heat has died down. Since he was caught on video tape committing the robbery, Ghantt is also the only suspect. Meanwhile, Chambers and his wife are living high-on-the-hog, leaving Ghantt to take the fall as authorities close in. After Ghantt threatens to turn himself in and implicate everyone, Chambers hires a gung-ho, sadistic hitman (Jason Sudeikis) to go down to Mexico and kill him.

This story has the makings for a pretty decent character-driven drama, but okay, one can still see the premise working as a comedy...maybe something with the clever quirkiness of a Coen brothers movie. Instead, Masterminds plays like it was written by - and for - 15 year old boys. A prime example is a scene where Ghantt, out of the blue, has explosive diarrhea in a hotel swimming pool. While I'm not opposed to poop jokes, there is absolutely no context here. One of the writers simply decided, "Hey, let's have Ghantt shit in the pool!" before moving on. Masterminds is full of desperate and pandering scenes like this, few that have anything to do with the story, and nearly all of which are painfully unfunny.

What a waste. The cast certainly looks like they're having fun, but polishing this turd is an impossible feat when saddled with a screenplay that mostly requires them to overact and scream. As for director Jared Hess...he provides another strong argument that Napoleon Dynamite may have been a fluke.

EXTRA KIBBLES:
FEATURETTE: "The Imperfect Crime" - This is actually a really interesting collection of interviews with various FBI agents who handled the real-life investigation, as well as the real David Ghantt (who still appears pretty proud of himself, and actually approves of the film's wholesale changes).
DVD COPY
KITTY CONSENSUS:

BLEH...LIKE COUGHING UP A HAIRBALL
Posted by D.M. Anderson at 12:47 PM