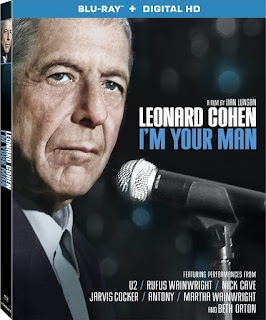 Confession time...while I've heard of Leonard Cohen, aside from "Hallelujah" and a few twisted tunes that appeared in Natural Born Killers, I know almost nothing about him or his music. A lot of my friends, mostly those whose tastes are slightly left of the mainstream, mourned his recent passing. For them, this documentary (posthumously released on Blu-Ray) will serve as a bittersweet tribute. For others, a chance to sate their curiosity.

Leonard Cohen: I'm Your Man is a 2005 film partially consisting of interviews with Cohen himself and musicians - both renowned and obscure - who were influenced by him. Cohen himself comes across as worldly, soft-spoken and charming as he discusses how his life and religious upbringing influenced his lyrics and poetry.

Interspersed throughout is footage from a recent tribute concert featuring various artists such as Nick Cave and Rufus Wainwright. Personally, I think including the performances was a mistake. Director Lian Lunson obviously has a lot of respect for his subject, but this would have been a better viewing (and learning) experience if it had focused exclusively on Cohen himself and saved the concert material for a separate project (perhaps a bonus supplement on this disc).

Still, even though Leonard Cohen: I'm Your Man didn't inspire me to rush out and buy one of his records, I do have some new-found respect for his work and talent. Since Cohen was never what one would consider a "popular" artist, I imagine there's currently a lot of other folks curious about this reclusive songwriter who's so frequently name-dropped. And it probably goes without saying this disc is a must-own for fans.