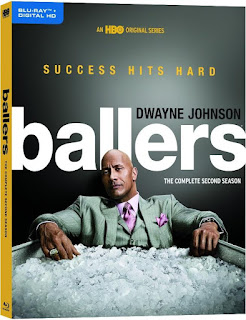 Though not exactly revelatory, the first season of HBO's Ballers was an amusing look at the behind-the-scenes escapades of NFL players and their often unscrupulous agents. Dwayne Johnson was his usual charming self, heading a good ensemble cast of well-rounded characters. Considering the pro football business isn't always portrayed in the most positive light, it was surprising that this show apparently had the full cooperation of the NFL.

But like many other HBO programs that start off with a bang, Season Two isn't as compulsively watchable (and initially incomprehensible if you're new to the show). These episodes aren't bad; most of the cast is back and Johnson appears as committed as ever. But perhaps this is a case where more means less. While show is essentially more of the same, the new storylines are a bit less compelling this time around, the main characters characters a bit less enjoyable (though Andy Garcia's recurring role as a rival agent is a nice addition).

Season Two of Ballers is by-no-means terrible, nor is there a monumental drop in the overall quality. I'm just beginning to think it accomplished all it really needed to in Season One. These new episodes tread familiar ground and simply continue the soap opera. While the show may no longer must-see viewing on HBO each week, fans may still enjoy binging on this Blu-Ray set.