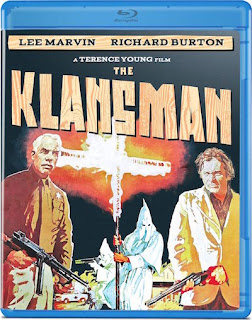 In order to appreciate some older films, it helps to keep-in-mind the era in which they were made. Of course a film like Gone with the Wind is going to appear racist and sexist to millennials looking for reasons to be offended. 1939 was a different era, and since we can't go back in time to set those backwards primates straight, we can still appreciate the film for its timeless narrative, iconic characters and visual splendor.

Then there are bottom feeders like 1974's The Klansman, which would be repugnant in any decade. Were not for the fact that it's narratively and technically inept, one could be really insulted by the film's attempt to wrap racially-charged, exploitative sleaze in a shroud of social awareness and self-importance. Like the equally reprehensible Mandingo, it's just a notch or two above a grindhouse film, only with a fairly respected director and two legendary actors apparently committed to tarnishing their legacies. That's one likely reason it has become a minor cult classic over the years.

Another reason is the well-documented turmoil behind the film. Lee Marvin and Richard Burton spent most of the shoot in a drunken stupor. I suppose it's a credit to Marvin's inherent talent that it doesn't really show. As a small-town southern sheriff trying to keep the peace while racial tensions develop between the black community and the local Ku Klux Klan (after the rape of a white woman), he gives the film's best performance by simply being the badass Lee Marvin we're accustomed to. Burton, however, must be seen to be believed. As a liberal landowner sympathetic to the black movement's cause, his southern accept comes and goes from scene to scene. There are ample moments when he is obviously shitfaced and barely able to get through a scene, sometimes unintelligibly slurring his lines.

The awful dialogue would actually be funny it weren't loaded with an overabundance of nasty racial slurs and epithets. Some such language is obviously necessary, but the film wallows in the depravity of the Klan's words & actions to an almost voyeuristic level, long after the viewer has gotten the point. This is best (or worst) exemplified by what might be the most prolonged and disturbing rape scene of any film released in the 70s. But that's not to say there aren't some laughs to be had; Burton's slap-fight with Cameron Mitchell is unintentional comedy gold, as is an early scene where two cars burst into flames after a mere fender-bender.

The Klansman is unquestionably bad, but there's an overall trainwreck quality to this film that renders it morbidly fascinating. Connoisseurs of 70's-era sleaze or Hollywood-gone-wrong might be pleased, especially since it's being released uncut on Blu-Ray for the first time. For everyone else, don't say you weren't warned.