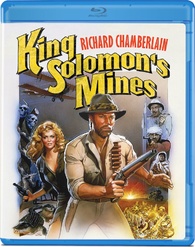 Mention Cannon Films to movie lovers of a certain age and you might see a big, dumb grin spread across their face. Prolific purveyors of pictures from any genre proven profitable, no studio is as synonymous with the trend-driven 80s as Cannon. While they did manage to squeeze out a respectable film here and there, the studio's specialty was budget-friendly action, usually featuring tough guys who probably couldn't get much big-screen work anywhere else. If you kept your expectations in check, a lot of them provided some disreputable fun.

In some ways, King Solomon's Mines is the quintessential Cannon film. It optimistically (and shamelessly) rips-off Raiders of the Lost Ark & Romancing the Stone while attempting to sell Richard Chamberlain (!) as an action hero similar to Indiana Jones. It fails, of course, because Chamberlain is no Harrison Ford (or even Michael Douglas), but you knew that already. A pre-Basic Instinct Sharon Stone channels her inner Kate Capshaw (and manages to be even more annoying). Even Raiders' John Rhys-Davies shows up to collect a paycheck. But really...is this the only work Herbet Lom could get?

House-director J. Lee Thompson, far-removed from the days of The Guns of Navarone & Cape Fear, takes a break from keeping Charles Bronson's career afloat to guide his cast through a silly story that bares only a passing resemblance to Haggard's original novel (hey, brand name recognition went a long way even in the 80s). The action is silly, the dialogue is inane and most attempts at humor are utterly eye-rolling (the nadir of all three being a scene that sees Chamberlain & Stone as the potential main ingredient for cannibal stew).

To say King Solomon's Mines hasn't aged well isn't an accurate assessment, since it wasn't that good in the first place. Besides, greatness was never Cannon's modus operandi. Revisiting the film today, one can't help but marvel how efficiently they struck while the iron was hot and ingeniously marketed the thing into a minor box office hit before anyone really caught on. Moviegoers weren't fooled twice though; the sequel, Allan Quatermain and the Lost City of Gold, completely tanked.

But like many other silly slabs of kitschy Cannon fodder from the 80s, such as Cobra, Breakin' and American Ninja, it's hard to pile too much hate on King Solomon's Mines. The film is so emblematic of the studio's glory years that there's something almost retroactively charming about it's earnest attempt to jump on the Indiana Jones bandwagon. Even back then, we suspected as much when ponying-up at the box office, or more likely, leaving the video store with an indiscriminately-selected stack of similar titles. Watching it today is apt to put a nostalgic, shit-eating grin across your face.